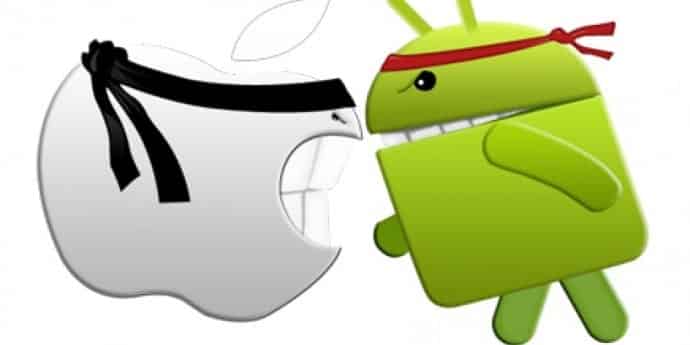 Android wins the battle against iOS, thanks to poor iPhone 6s sales

Apple is said to be going through an innovation crisis, as the company has hardly launched “revolutionary” products in the last couple of years. Further, the Silicon Valley giant is concentrating more on reinventing products that were designed a few years ago, which in turn has led to drop in adoption figures in major markets.

iOS also appears to have been affected by the poor demand for the iPhone 6s and 6s Plus, which were launched in September 2015 as revives of the core devices launched one year before.

With the drop in demand for new iPhones, which is expected to fall below the 200 million mark this year, more users are shifting to Android these days indicate new data provided by Kantar.

With increase in Android’s domination and improved shares in almost every single country, Apple’s iOS has lost users in the biggest markets.

For example, in Europe, Android has achieved increases in every single market, attaining a growth of no less than 6.7 percent in the EU5 region (February 2015 versus February 2016).

The main change was noticed in Italy where Android enhanced its share by 12.1 percentage points, reaching a record 78.4 percent. On the other hand, in the same country, iOS actually lost 3.2 percent and dropped to 14.3 percent. In France, Android achieved a growth of 9.1 percent to settle at 71.8 percent, while iOS fell down by 1.7 percent to reach 19.9 percent.

However, Spain was the sole country where iOS actually bettered its share, as the platform went up 0.4 points to achieve 9.1 percent. Android also managed an increase of 2.0 percent to reach no more, no less than 90 percent. This implies that in Spain, 9 out of 10 phones are powered by Android, which is very impressive.

Even though US remains the key market for iOS, things are not shaping well for the operating system here either. At present, Android is working in 58.9 percent of the devices in the country, a 3.3 percent rise over February 2015, while iOS lost 0.5 percent of its share and dropped to 38.3 percent.

The other mobile platforms there don’t even count because Windows reduced to 2.2 percent from 2.6 percent, while the “Other” category went down to no less than 0.2 percent.

According to Kantar, current buyers are not interested to spend money on a high-end device and that’s why Android is growing so fast, as there are far more affordable choices when it comes to Google’s OS.

However, this news should not dishearten Apple, as the iPhone SE could also see growing sales and thus help the iOS recovery on the short term.

Lauren Guenveur, mobile analyst for Kantar Worldpanel ComTech explained, “In the US, the average spend on purchasing a smartphone in the three months ending February was $352. For Android buyers that meant that roughly 69% of consumers reported spend under $350, while for iOS buyers, that share was 39%. This represents a unique opportunity for the newly launched iPhone SE, which, at a $399 price point, will likely appeal to more cost-conscious first-time smartphone buyers who might otherwise be more inclined to pick up an Android smartphone, and to the sizable installed base of iPhone owners who have not yet upgraded.”