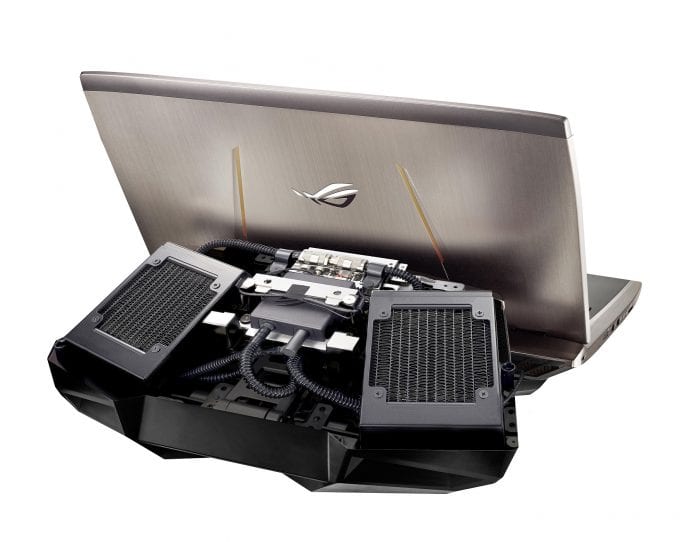 Watercooling is definitely possible with desktop gaming systems but it has to be configured properly and carefully in order to prevent the possibility of leakage inside of your system. With Asus ROG GX700 however, the prospect of water cooling has been ported to gaming laptops, and the mobile gaming machine packs impressive hardware underneath its bulk exterior.


For starters, it has a Skylake desktop processor present inside; an Intel Core i7-6820K. The CPU has a clock speed that ranges from 2.70-3.60GHz and if you did not notice, the processor has an unlocked multiplier, allowing you to increase the frequency of the chip to get higher frames in upcoming video games. Additionally, there is 32GB of DDR4 RAM present that can be overclocked to 2800MHz.
The screen size itself its extremely large; a 17.3 inch G-Sync LED backlight display with a resolution of 1080p. The laptop is also running a fully functional NVIDIA GeForce GTX 980 GPU with 8GB of DDR5 video RAM. Aside from that, there are 2 256GB SSDs running in the RAID 0 SATA format, along with a single 1TB mechanical hard drive. According to Asus, there is a Hydro Overclocking system that uses a pump to circulate coolant to the heat-generating components, the GPU and CPU, and back to the cooling module.
You can choose to attach or detach the watercooling system, but if you are intending to use the machine for overclocking purposes, then it is vital that the cooling feature remains attached to the laptop. For its specifications, calling Asus ROG GX700 a gaming beast is definitely an understatement, but its price tag is far too steep, even for those who spend a ton of money assembling desktop gaming computers.

The pre-order price of Asus ROG GX700 starts at $4300, and while the machine is definitely impressive for its hardware, Asus should definitely dial that pricing variable down when it releases another high-end gaming laptop in the future.