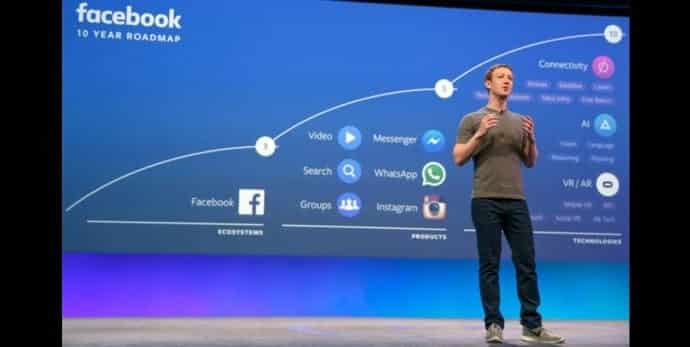 Facebook has revealed its roadmap for the next 10 years at its F8 developer conference held at Fort Mason in San Francisco, which is split into three main segments, or “horizons” – as CEO Mark Zuckerberg calls them. This includes strengthening its product offerings to investing in technologies like drones, satellites, telecom infrastructure, artificial intelligence and virtual reality in the mobile and social segment.

Facebook’s 31-year-old CEO explained how Facebook aims to reach the planet’s 7 billion people — half of whom do not have Internet access. He also took direct aim at those who would limit free trade and immigration.

“We are one global community,” he said. “Whether we are welcoming a refugee fleeing war or an immigrant seeking opportunity, coming together to fight a global disease like Ebola or to address climate change.”

The theme of the keynote was, “give everyone the power to share anything with anyone,” positioning Facebook as a uniting force for good against the current political winds of discord.

Apparently, the first section of Facebook’s 10 year roadmap is about improving and growing the social networking platform, especially with an increasingly international bent largely focused on Asia, such as India and Africa. In addition, raise its efforts on cloud infrastructure and the React Native framework for mobile app development.

The next section shows that Facebook intends to strengthen its ecosystems for the next three years, followed by its family of apps that includes WhatsApp, Messenger, Instagram, Video, Search and Groups in the five years period.

Over the next five years, Facebook wants to provide developers the required tools to grow an entire ecosystem around each of these apps, which can offer better monetization opportunities. For instance, Facebook’s Messenger Platform will revolve around connecting businesses to people. Between Messenger and WhatsApp, Facebook processes 60 billion messages a day, or “three times as many messages as SMS ever did.”

The next five years seems to be focused on its ambitious tech bets in the connectivity segment like drone and satellite-based Internet services, telecom infrastructure and the controversial Free Basics; in artificial intelligence-powered vision & reasoning and in virtual reality & augmented reality.

The company also reinforced its efforts to ‘connect the world,’ including releasing a simulator for its Free Basics program. Zuckerberg also showed off part of the company’s drone airplane, which uses lasers to bring the Web to places with poor connectivity.

For artificial intelligence, Zuckerberg outlined how AI is being used today and how Facebook wants to learn the content. “We will be able to read the video and know what they are about,” said Zuckerberg. “The aim will be to deliver more relevant content, but Facebook’s ambitions will be much larger.

“In a lot of ways advances in AI can save people’s lives,” said Zuckerberg. “We want to make it easier for you to take advantage of AI.” Zuckerberg outlined Facebook’s open source Torch system to train neural networks.

On the VR front, Zuckerberg advertised Gear VR as a start, but noted that drones will intersect with augmented reality.

“One reason VR is important is we’re working on new social experiences. VR can be the most social platform,” said Zuckerberg. “When we get to this world. A lot of the things we think about a physical thing like a TV will be $1 apps. It’s going to take a while.”

Also, Facebook has plans to introduce a bot framework as part of the new Messenger Platform Beta. Developers can now build chatbots for Facebook Messenger that can learn your habits and choices to give you personalized news, or retrieve information that you request from a specific service, similar to Microsoft Cortana.

Developers will also be able to choose to integrate images, links, or call-to-action buttons, as the bots will not be limited to text. At the top of the Messenger app, you will be able to find bots via a new persistent search bar and you can just tapping a block button that appears at the top of every conversation to mute it.