Do you know where is the world’s Wi-Fi?

According to the data submitted by the user, North America and Europe have extensively more Wi-Fi networks than the rest of the world.

In order to recognise more than 236 million connections, more than 150,000 users of WiGLE submitted information on the location of Wi-Fi networks around the world to aid the US-based wireless-mapping site.

With more than 50 million Wi-Fi networks identified, the US dominates the data, which is significantly more than the next highest country, Germany that has almost 9 million networks.

At over 6 million, California has the most wireless networks in the US, followed by Texas. With more than 2 million recognized, the East Coast and specially the New York State has a high concentration of networks, which is more than the total sum of networks identified in Australia.

As shown in the map below, the Wi-Fi density in metropolitan areas of the US contrasts starkly with the number of connections in more rural states.

These maps are however unlikely to provide a full picture of global Wi-Fi, as they have limitation since they are based on user data. For instance, many countries are mentioned as having lesser than 10 identified networks.

While wireless connectivity has become an important part of everyday life, today’s internet capabilities are way ahead from the days of dial-up internet. Whether it’s checking emails during the morning travel or high-tech military manoeuvres, Wi-Fi provides on-the-go connectivity. 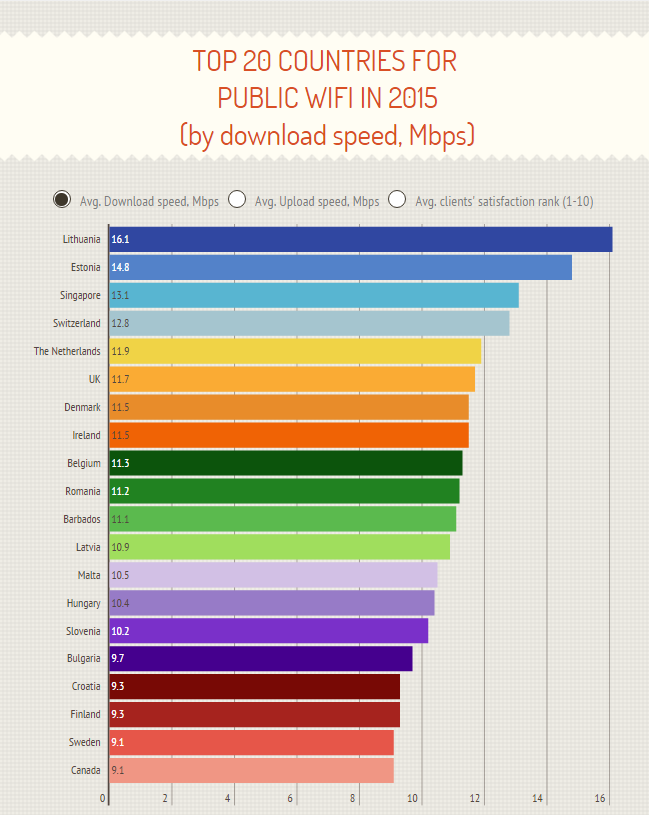 However, the quality of connections does vary. Rotten Wi-Fi carried out a survey of 184 countries, which identified the countries with the best public Wi-Fi networks. Every country is tested on the speed and quality of public hotspots depending on users’ experiences.

With a download speed of 16.1 Mbps, Lithuania tops the list. On the other hand, where Europe dominates the leader board, the US does not even make it to the top 20, given the global dominance of Wi-Fi networks and being a base for many of the world’s biggest internet companies.

Even though some parts of the world have plenty of Wi-Fi networks, Africa is still struggling behind. In 2015, only around one in 10 African households had internet access as compared to over 80% of European countries. While a United Nations report on global connectivity guesses that almost half of the world’s population will have accessed the internet in 2015, this figure falls to less than 10% for the least developed countries.

In comparison with more developed countries, African countries also pay much more for broadband. Africans pay 178% of per capital gross national income (GNI) for access, a huge increase from the next highest area, Asia Pacific, where broadband costs only 16% of GNI. However, this number reduces to 1.3% for Europe.