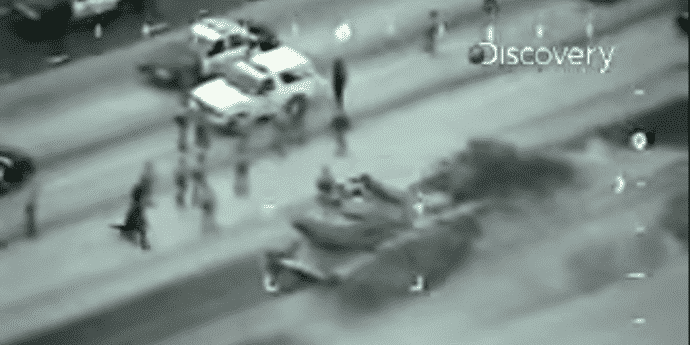 Normally when you get pissed of at work, you take a deep breath and let the anger subside. If you are even more angry, you take a paper weight and slam it down or bang the office desk to vent your fury. But this gentleman did something that would find a place in history.

A out of work plumber who was a US army veteran decided to teach the authorities a lesson for pissing him off. He stole a M-60 battle tank used by the US Army. Whats more, he drove the tank in the downtown streets of San Diego crushing everything in the way.

Shawn Nelson, the US army war veteran who was driving the tank met with a unfortunate end. He stole an M60A3 Patton tank from a United States National Guard Armory in San Diego, California, and went on a rampage on May 17, 1995, destroying cars, fire hydrants, and a recreational vehicle before being shot and killed by police.

His life story is filled with tragedies and decided to commit suicide on the god forsaken date. Nelson led police on a 23-minute, televised chase through the streets of the Clairemont neighborhood of San Diego. The tank had a top speed of 30 miles per hour (48 km/h), making the chase slow compared to police chases involving automobiles. The 57-ton tank easily plowed through road signs, traffic lights, fire hydrants and crushed several parked vehicles including an RV. He even attempted to knock down a bridge by running into the supports, but gave up after he failed to topple it with the first few hits.

He eventually became caught on a concrete median of State Route 163, as he attempted to cross the median into the oncoming traffic. Four police officers climbed onto the tank. San Diego Police officer Paul Paxton, a gunnery sergeant at the time with the Marine Corps Reserve, was able to open the hatch. The officers ordered Nelson to surrender, but he said nothing and began lurching the tank back and forth in attempt to free it from the median.[2] Officer Paxton’s partner, Richard Piner, leaned in and shot Nelson. The bullet struck Nelson in the shoulder. Nelson later died in the hospital. Despite the widespread property destruction, Nelson was the only fatality in the incident.