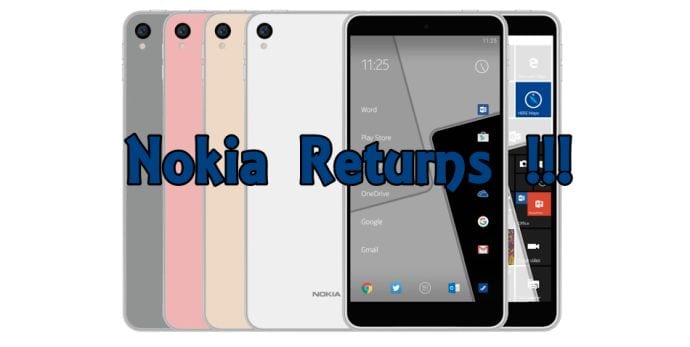 Nokia is back!!! This seems to be the statement that the yesteryears king, Nokia wants to make. Two years after the Finnish company sold its flagship handset business and walked away defeated by Apple and Samsung Electronics, it is coming back but this time with Android smartphones and tablets.

The Finnish company said Wednesday it will license its brand to a Helsinki-based company run by former Nokia managers who aim to bring new mobile phones and tablets to the market. HMD Global plans investments topping $US500 million. Nokia won’t have a financial stake in the venture, though it’s set to collect fees from brand licensing and intellectual property.

“To shake up the market and offer something that excites the fickle market will be difficult.”

Nokia seeks to make the shoppers remember its rugged feature phones and a very recognised after sales backbone. The brand that almost disappeared from the shop counters with the sale of Nokia’s handset unit to Microsoft in 2014. Nokia, gets a risk-free second chance at a business  which is not ruled by Apple, Samsung, LG and HTC.

The attempt to revive Nokia phones and tablets comes almost two decades after Nokia, then the world’s largest smartphone maker, reached its highest valuation of almost $US250 billion. It is now worth around $US30 billion.

HMD is funded by a group of international private-equity backers through a fund called Smart Connect, as well as by HMD’s management team. The venture will be run by Arto Nummela, a former Nokia manager and current head of Microsoft’s Mobile Devices business for Asia, Middle East and Africa and its feature-phone business. Florian Seiche, also a former Nokia executive and current Microsoft manager, will be president at HMD.

Nokia and HMD wont have it easy because two years is a long time in the very dynamic mobile markets. With Samsung, Apple and Huawei Technologies dominating smartphone sales with about half of the total 334 million high-end phones shipped in the first quarter, Nokia has its future cut out.

The new venture also marks an exit from cheaper phones by Microsoft. As part of the arrangements announced Wednesday, Microsoft is selling its feature-phone assets to FIH and HMD.