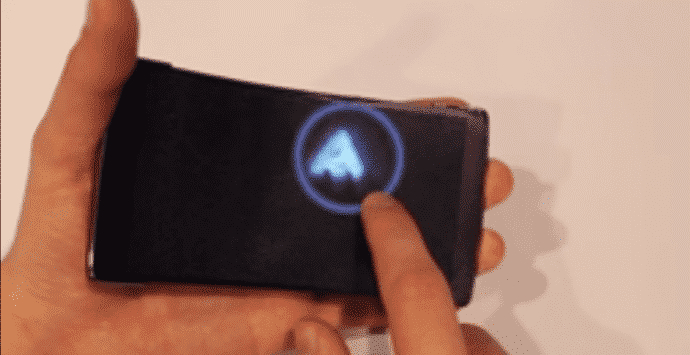 HoloFlex smartphone developed by the researchers runs on Android 5.1 Lollipop and can render 3D images with motion parallax and stereoscopy so that whatever’s on the screen looks like a floating hologram to anyone who is within viewing range, without the need for special eyewear. The research team in its promo says that users can watch Princess Leia of Star Wars come to life into their palms.

“HoloFlex offers a completely new way of interacting with your smartphone. It allows for glasses-free interactions with 3D video and images in a way that does not encumber the user.” says Dr. Roel Vertegaal, the director of the university’s Human Media Lab and leader of the research team. Dr. Vertegaal says that HoloFlex smartphone is a breakthrough technology will usher in a new chapter in the way we use smartphones. It will also facilitate running of a number of applications which currently use PCs. A first application is the use of bend gestures for Z-Input to facilitate the editing of 3D models, for example, when 3D printing. Using the touchscreen, a user can swipe to manipulate objects in the x and y axes, while squeezing the display to move objects along the z-axis. Due to the wide view angle, multiple users can examine a 3D model simultaneously from different points of view.

Dr. Vertegal says that Holoflex’s tech could also be used for holographic video conferences that make callers appear like they’re in the same room as other participants:

By employing a depth camera, users can also perform holographic video conferences with one another. When bending the display users literally pop out of the screen and can even look around each other, with their faces rendered correctly from any angle to any onlooker.

Though the HoloFlex images appear a bit crude as they have a resolution of just 160 x 104 pixels as of now but the technology is sure to usher in a new wave of holographic smartphones in near future.

The researchers will unveil Holoflex smartphone at the upcoming ACM CHI human-computer interaction conference, slated to kick off on May 9 in San Jose.