In our recent article, we had reported that how new hacking group, OurMine have been targeting elite tech accounts around the world. Their recent victim was Daniel Ek, the CEO and founder of Spotify. They are also responsible for breaking into the social media accounts of Facebook CEO Mark Zuckerberg, Channing Tatum, YouTubers Pewdiepie and Markiplier, Deadmau5, David Guetta, and former Twitter CEOs Dick Costolo and Ev Williams.

The recent victim to make this list was CEO of Google, Suchar Pichai. It appears that the Quora account of Google’s CEO has been hacked. The three-man hacker outfit has been posting messages on Quora through Pichai’s account. His Quora account is connected with his Twitter account. As a result, OurMine was able to tweet their hack to all 508,000 of his followers. However, the tweets have been removed now. 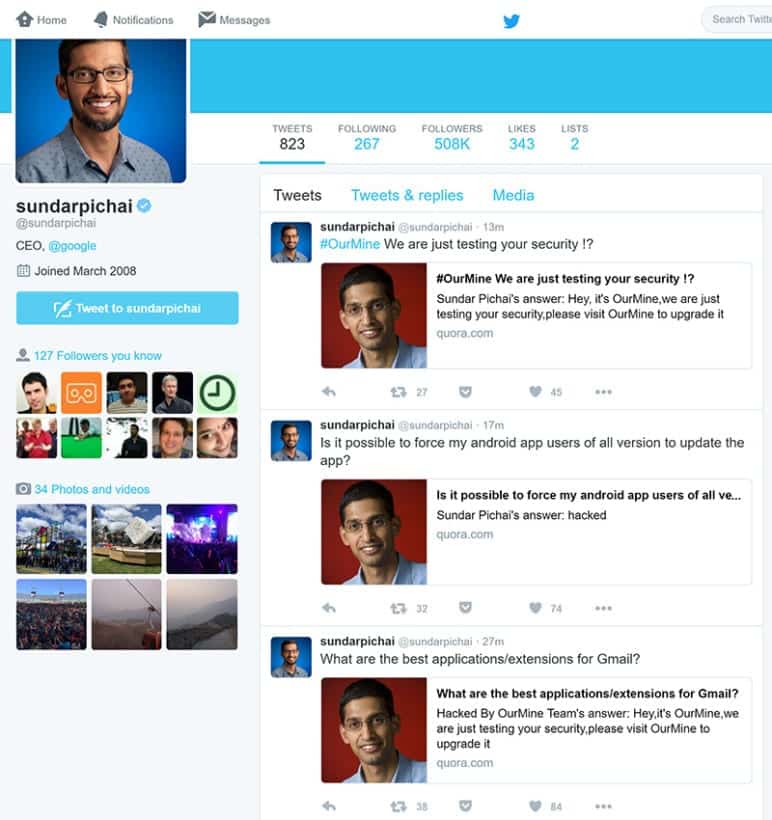 While it is unclear how the group is gaining access to their accounts, it likely doesn’t involve system breaches of the social networks their targets have accounts with. Instead, the group claims that it uses numerous exploits to pull passwords from celebrities’ browsers.

OurMine claims itself as a Security Firm. They said they are trying to support it’s targets so that these incidents do not happen again.

The group told TNW that it was only conducting a test. Here is what they said:

“We are just testing people security (sic), we never change their passwords, we did it because there is other hackers can hack them and change everything.”

The group also noted that it managed to gain access to Pichai’s account by exploiting a vulnerability in Quora’s platform, one that it claims to have reported to the company, but have got no response.

If you’re on Quora, it is advisable to change your password right away. Ensure that it is not the same as what you have for other services.