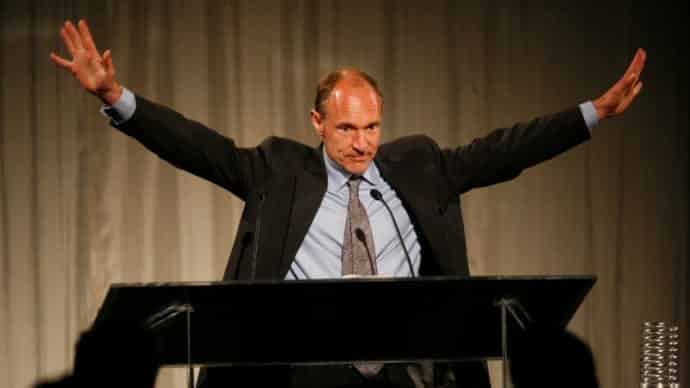 Inventor of Web, Tim Berners-Lee says that we need a new web that is out of government control

Tim Berners-Lee, inventor of the World Wide Web, says internet has become the world’s most powerful medium for knowledge, communications and commerce from the time it was created for scientists to easily find information.

“It controls what people see, creates mechanisms for the people to interact,” he said of the modern day web. “It’s been great but spying, blocking sites, repurposing people’s content, taking you to the wrong websites: that completely undermines the spirit of helping people create.”

Since, the World Wide Web is often subject to control by governments and corporations; Berners-Lee wants to create a decentralized web that has more privacy, less government control, and less corporate influence.

To that end, Berners-Lee and other top computer scientists, including Brewster Kahle – head of the Internet Archive and internet activist – brainstormed with ideas at an event called the Decentralised Web Summit in San Francisco, for a new kind of information network that cannot be controlled by governments or powered by mammoth corporations like Amazon and Google. Also, present at the event were top names like TCP/IP protcol co-creator Vint Cerf, Mozilla Project leader Mitchell Baker and Electronic Frontier Foundation special advisor Cory Doctorow to discuss on this new kind of internet.

“Edward Snowden showed we’ve inadvertently built the world’s largest surveillance network with the web,” said Kahle, whose group organized the conference. “Just a few big service providers are the de facto organisers of your experience. We have the ability to change all that.”

Participants and speakers also mulled over the use of increased encryption, the adoption of technologies created at the inception of digital currencies, reduce content creators’ and publishers’ dependence on ad revenue by developing secure, direct cryptocurrency-based payment methods for subscribers.

Methods of archiving the web and storing multiple copies of a site were also discussed. Various payment methods, such as adopting the “ledger” system used by BitCoin and similar cryptocurrency were also discussed as a means of allowing for more “individual control of money.”

Berners-Lee said. “People assume today’s consumer has to make a deal with a marketing machine to get stuff for ‘free,’ even if they’re horrified by what happens with their data. Imagine a world where paying for things was easy on both sides.”

The movement to change how the web is built has an almost religious dimension. Still, not all the major players agree on whether the web needs decentralising.

“The web is already decentralised,” Berners-Lee said. “The problem is the dominance of one search engine, one big social network, one Twitter for microblogging. We don’t have a technology problem, we have a social problem.”

The Decentralized Web Summit is on from June 8-9 and you can catch the livestream on the event’s ZeroNet site.