Bluetooth is named after a 10th century Scandinavian King, know the story behind it

The introduction of Bluetooth in technology came as a revolution, which not only improved the utility of mobile phones, but also made sharing of files a pushover. It gave a new meaning to the world of wireless communication. But have you ever pondered how Bluetooth got its name in the first place? Have you ever wondered where the origins of the term “Bluetooth” came from?

However, there is a very interesting story behind this.

In 1996, a number of companies – Intel, Ericsson, Nokia, and later IBM – were looking to standardize the industry around a short-range radio link for doing a number of things. Each company had been developing their own short-range radio technologies, but all the names they came up with sucked. That is when an obscure Scandanavian king came from the Middle Ages.

King Harald Gormsson is famous for ruling Denmark and then Norway between about 940 and about 986. King Harald was also famous for completing his father’s work of unifying the various Danish tribes into one Danish kingdom around 970. Even though, he was only able to maintain this unification for a few years.

Like many medieval rulers, he also had a nickname: Blatonn in Old Norse (a member of the Germanic family of languages) or Blatand in Danish. It means Bluetooth. The exact origin of the nickname is up for debate, but many scholars believe that King Harald was called Bluetooth because he had a conspicuous dead tooth that exactly looked black and blue. It does make sense. 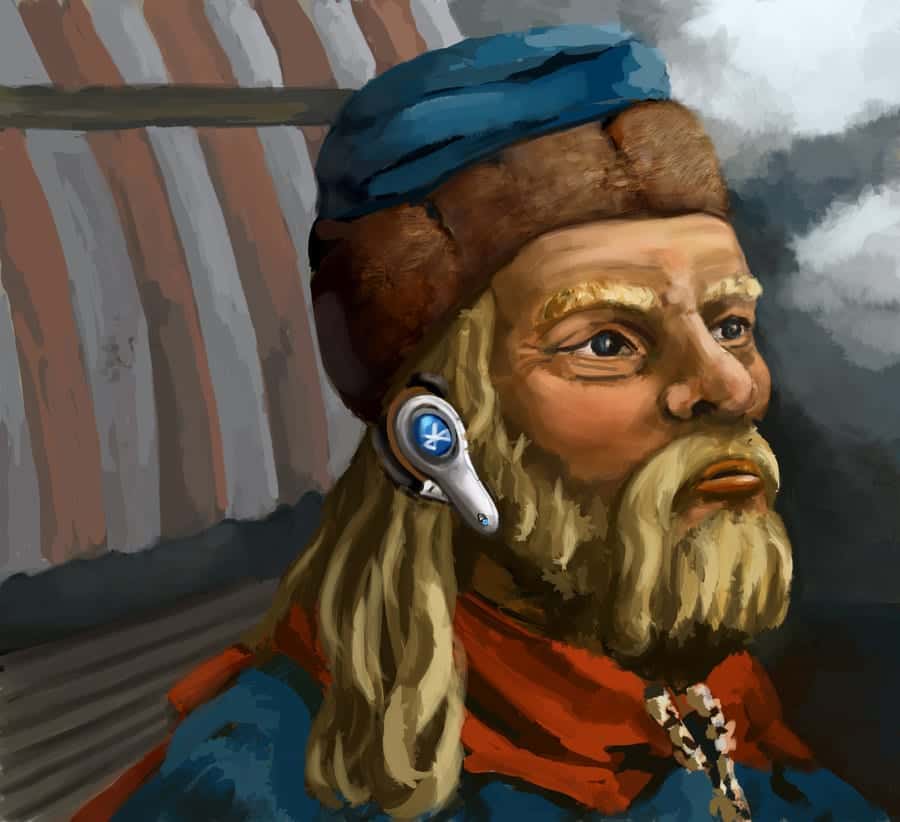 So, what does a turn-of-the-last-millennium Viking king have to do with wireless communication? He was a uniter!

In the mid-1990s, the wireless communication field needed some uniting. Many corporations were developing competing, non-compatible standards. Several people saw this growing division as a weakness to widespread adoption of wireless.

That is when Intel engineer Jim Kardach took on the role of a cross-corporate mediator devoted to getting various companies together to develop an industry-wide standard for low-power, short-range radio connectivity. He was equally supported by Ericsson engineer Sven Mattisson.

While having a conversation on history, Mattisson told Kardach that he had just read a book called The Longships by Frans G. Bengtsson that compiled the travels of Danish warriors under the reign of King Harald “Bluetooth” Gormsson. Later, Kardach read The Vikings by Gwyn Jones that featured the reign of Harald, whom he viewed as an ideal symbol for bringing competing parties together, as he explained:

“Bluetooth was borrowed from the 10th-century, second king of Denmark, King Harald Bluetooth; who was famous for uniting Scandinavia just as we intended to unite the PC and cellular industries with a short-range wireless link.”

“Harald had united Denmark and Christianized the Danes!” Kardach wrote in a column a decade later. “It occurred to me that this would make a good codename for the program.”

All the different interested parties finally came together to form the Bluetooth Special Interest Group, which developed the agreed-upon standard we know and love today. “Bluetooth” was originally meant to be just a code name for the technology. It ultimately ended up sticking though and became the official name of the standard.

The millennium-old story doesn’t end there. The Bluetooth logo also derives from “Harald Blatand”, with the long-branch Nordic runes for “H” and “B” comprising the design you see in the blue oval of the logo. The now iconic Bluetooth logo is in fact a combination—officially known as a bind rune—of King Bluetooth’s initials in Scandinavian runes: ? and ?. When you join the two to make a bind rune and drop it on a blue background, you get the acquainted Bluetooth logo.

So, this is how, we got this name and the symbol! Interesting, isn’t it?