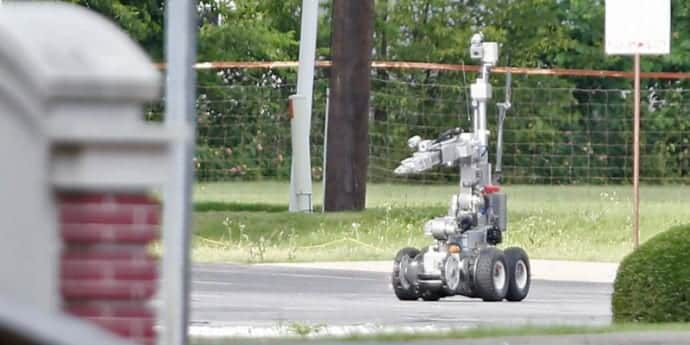 In the wake of standoff between police and one of the suspects in a Dallas shooting spree, which left at least five police officers dead and seven others wounded, along with two civilians on Thursday night, police in Dallas used a bomb disposal robot to kill a suspect inside a downtown Dallas parking garage. The law enforcement deployed the “bomb robot” armed with an explosive, to the suspect’s location after negotiations with the suspect failed. It then detonated the explosive, killing the suspect.

“We saw no other option but to use our bomb robot and place a device on its extension for it to detonate where the suspect was. Other options would have exposed our officers to great danger,” said Dallas Police Chief David O. Brown in a press conference on Friday. “The suspect is deceased as a result of detonating the bomb.”

The shootings in Dallas occurred at the end of an otherwise peaceful demonstration stimulated by police shootings this week that killed Philando Castile in Minnesota and Alton Sterling in Louisiana.

The suspect told police that he was upset about the recent shootings of Philandro Castile and Alton Sterling and wanted to kill white people, “especially white officers,” according to The Atlantic.

The suspect who was killed claimed that he had planted bombs in the area, but the New York Times reports that officials said they swept the area and didn’t find any. The explosive the robot was carrying that killed the suspect was a police explosive.

Peter Singer, a strategist and senior fellow at the New America Foundation who writes about the technology of warfare, said he believed this was a first. “There may be some story that comes along, but I’d think I’d have heard of it,” he said.

Others agreed. “As far as I know, it appears to be the first intentional use of a lethally armed robot by the police in the United States,” said Elizabeth Joh, law professor at the University of California at Davis.

Repurposing a robot that was created to prevent death by explosion clearly contrasts with the way these machines are normally used. The move represents a potentially unprecedented use of robots to deliberately deliver lethal force in domestic policing, according to experts, raising questions about how local law enforcement officials are deploying the high-tech tools that increasingly fill their arsenals.

Bomb disposal robots are regularly used to minimalize the potential of harm to officers and civilians when disarming or clearing potential explosives from an area. They are often equipped with their own explosive charges and other tools, not to kill, but detonate other potential bombs in the area.

In another major news story last year, the Dallas police used a bomb disposal robot when their Dallas headquarters were attacked by a gunman who planted explosives. That assailant was shot by police, not killed by the bomb robot.

It’s not shocking that Dallas police are trained to use robots in the field, but the situation following Thursday’s shooting is unusual. Police have been using robots in increasingly innovative ways, like to deliver food and a cellphone to a man on the brink of taking his own life in San Jose, points out the Verge. However, the scenario following the Dallas shooting is much more charged. Crucially, the robot did not make any decisions itself and would not be capable of doing so.

While it is unclear how police controlled the robot, wireless protocols can be easily interrupted or changed by skilled hackers. Security researcher Matt Blaze points out that the security of a machine like this becomes more significant once it has shown the capacity to be used as a weapon.