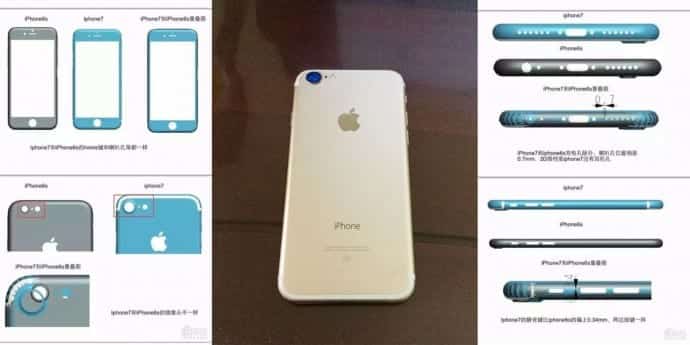 iPhone 7 rumors: Apple’s next smartphone could have larger cameras

The new leaked images of the iPhone 7 appear to confirm rumours that the handset will feature a larger camera. The latest photo of the alleged iPhone published by Techtastic.nl gives the glimpse of the back of the new device that point at its larger camera lens.

For beginners, the iPhone 7 and 7 Plus will retain the same overall shape, making use of an aluminium uni-body casing with curved edges. The antenna bands have been altered in line with many prior leaks, sitting in a new position and feeding into the top and bottom edges.

It is anticipated that different camera hardware is set to appear on the new smartphones, with the altered cut-outs on both handsets being the giveaway. The camera hole on the smaller device has been moved more into the top corner, is much larger, suggesting a better sensor.

The iPhone 7 Plus will step it up even more – its pill-shaped enclosure will house a dual-camera system, featuring significantly improved picture quality and new features. It is also expected to have volume controls, mute switch, dual-LED flash, and a microphone on the bottom and next to the rear camera.

The images also show the bottom of the iPhone and as expected, the headphone jack has been omitted – it’s been long rumoured that Apple will drop the port from its next handset. In its place, according to the leak, sits a second row of speaker holes, strongly hinting at big audio improvements by way of dual speakers.

The next generation iPhone 7 is also expected to be as thin as the current iPod touch – between 6mm and 6.5mm – and have a larger memory as the company ditches the 16 GB model. There is also a traditional looking SIM card slot, which likely rules out a sketchy rumour about the iPhone 7 having dual SIM trays for use with multiple carriers.

Despite rumours that an iPad Pro-like Smart Connector would be an exclusive feature on the iPhone 7 Plus, it is nowhere to be seen in any of the new images.

The renders also offer no hints about Apple’s plans to use a flush, touch-sensitive home button, a feature that could be reserved for the tenth-anniversary iPhone with an OLED display and glass casing expected in 2017.

As per Apple’s autumn release cycle, Apple is widely expected to announce the iPhone 7 and iPhone 7 Plus at an event in San Francisco during early September, before going on sale typically two weeks later.