You may have probably read about the Australian Bureau of Statistics Census website, which was in news recently for reportedly for being hacked. The Australian government reportedly spent $10 million and used countless man-hours for the census website which is used once in five years by Australian citizens to fill in details. On 10th August, amidst the reports of hack attack, the site was apparently brought down by hackers through a DDoS attack.

The DDoS attack made headlines because the census website stores every detail of Australian citizen and a data breach would have been disastrous. 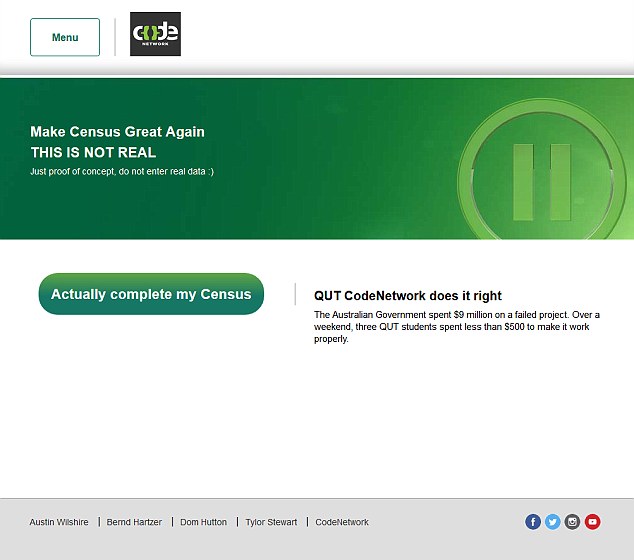 The pair took a little over two days to make the site, and it cost them less than $500 – far less than the $10 million the Australian government spent on their site. Their project – titled ‘Make Census Great Again’ –  used ‘serverless architecture’ by hosting their site on Amazon servers. The point of hosting it on AWS was that it could not get overloaded and thus be subjected to a DDoS attack like the original ABS website was.

‘From the outset we designed the system to scale using cutting-edge serverless architecture,’ Wilshire said. ‘The technology is new, only two years old. It allowed us to run little snippets of code (called Lambda functions) on Amazon’s servers.  ‘This means that their system operation staff (arguably some of the best in the world) are the ones taking care of scaling for us,’ he said. ‘They took care of all the load services and traffic issues you might have,’ the 18-year-old added.

‘We made something that was really simple because it didn’t need to be complex,’ Mr Hartzer told Daily Mail Australia. ‘We were able to work without a lot of limitations, that the people who made the Census website would have had tons of,’ the 24-year-old added.

It was no surprise that Hartzer and Wilshire’s $500 census website won first place at their first hack-a-thon, competitions which are put on my Code Network, a student organisation based out of QUT.