Samsung has filed a new patent application in South Korea in which a user can switch back and forth between Android and Windows Phone operating systems simultaneously. The patent was filed back in May 2015. Currently, Samsung phones only run on the Android OS with a few exceptions that run on the company’s home-bred Tizen OS.

Basically, switching between the systems is much like  working with, multiple apps in Samsung’s Multi Window feature as implemented in current Galaxy smartphones. The company is using one OS as standard and whenever a user will press the Home button, it will go back to the same default OS.

According to reports, diagrams of the patent filing show how the two OS will co-exist and be used simultaneously. The OS that is not in use will minimise in the form of an icon and the user can tap it to jump into that OS. Further, it also shows how shared folders and resources can be set-up so that both operating systems have access to them, and their performance could be manually limited by tweaking their access to the CPU, RAM and storage. Users can even drag and drop files between the two operating systems. The patent also states that users will be able to view files from both the OS.

Whether this patent would turn into reality only time will tell. In the past too, the South Korean giant had officially introduced the dual-boot tablet Ativ Q in 2013. Even though it was a really interesting concept, the tablet has never made it to shelves. 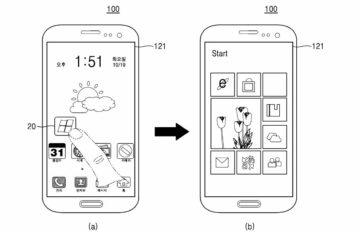