“Coding Confessional” Record your confessionals if you hate your programming job

A majority of software developers have chosen programming career out of love for coding and the awesome opportunities it offers. Software development jobs can be awesome. It offers you a window to some the best cutting edge technology out there. Many of programmers may be enjoying the work they are doing but there may be a few who are working on sordid and monotonous projects. There are the jobs that are, frankly, soul-suckingly horrible and many may just be working there for the sake of money.

One such chap who wanted to have fun on his job created a code to do the office work for him so that he could enjoy the spare time playing CounterStrike and surfing Internet. He did that for six years before being found out and fired. Too bad, he was sacked when the company found out but rather sad part was that he had forgotten how to code during those six years of fun. You can read his full story here.

However, not many of programmers may be as lucky or unlucky as him and may have to sulk it out at their workplaces. Now they have a chance to vent their fury anonymously at a place aptly named Coding Confessional. 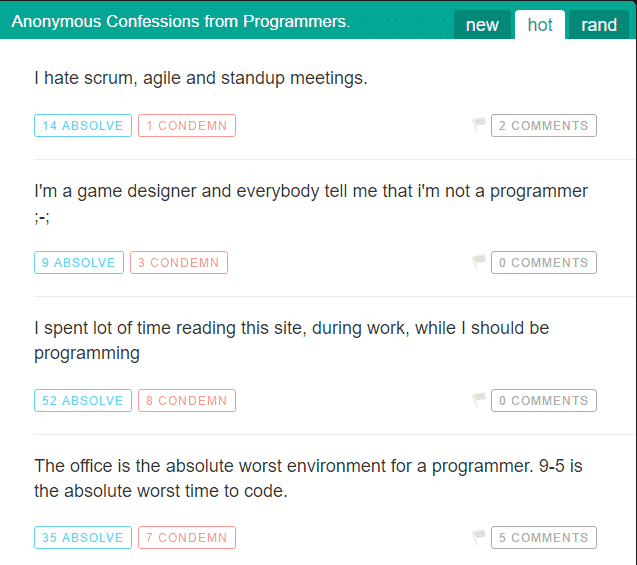 The place even has a system of Absolutions and Condemnations like a real world confessional where fellow members either give absolutions or condemn your act.

While the system is great for coders and devs looking to sulk and get over it, the place is also great for wannabe coders who can get an intimate look into the bad side of programming.

The confessionals are often a mirror into what the devs feel about their workplace. One such coder on Coding Confessional states that he is still using MD5 passwords even though he knows that they are highly insecure. He confesses that  “if anything bad happens it’s the company that is going to take the fall.”

The guy has received a high number of condemnations from fellow devs because they don’t agree with him.

Another anonymous poster says that despite still loving programming, he hates working as a programmer, while a third one merely says “I hate my job.”

If you are remotely interested in programming, you should be a member of the site. If you have your own confessions to share, you can do so here.