The 10 most popular computer languages, according to the Facebook for programmers “GitHub”

JavaScript is by far the most popular programming language on GitHub. This is a super-popular programming language primarily used in web apps. But it doesn’t have much to do with Java besides the name. JavaScript is powering top websites, but it also catches a lot of flak for slowing browsers down and sometimes exposing users to security vulnerabilities. 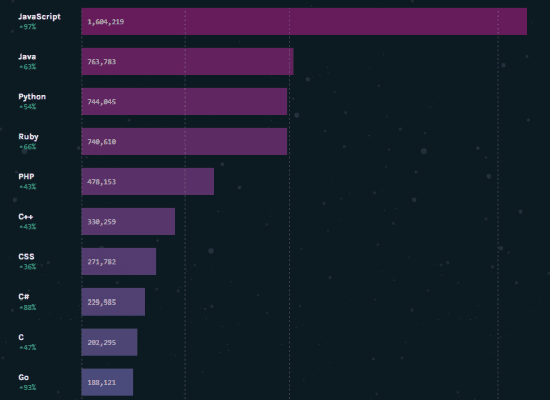 Java is ranked at number one on other programming language rating website but it has come in at 2 on GitHub. Originally invented in 1991 as a programming language for smart televisions, Oracle’s Java is now the second most popular language in the world. Java is also popular because it plays a huge part in Android app development and lots of business software.

Python is the perennial favourite for hackers and security researchers. This language traces back to 1989. Like Ruby, Python is loved by its fans for its highly readable code. Many programmers suggest it’s the easiest language to get started with, right alongside Ruby.

Ruby is popular among developers who work on code-intensive products. Developers like this 24-year-old language because it’s easy to read and write the code. Also popular is Rails, an add-on framework for Ruby that makes it really easy to use it to build web apps. The language’s official motto is, “A programmer’s best friend.”

PHP is a website developers delight. This language is mostly used in developing websites and estimates suggest that it powers one-third of the web. PHP powers biggies like all the WordPress websites, Facebook, and Yahoo. A lot of programmers also hate PHP with a passion — Stack Exchange founder Jeff Atwood once wrote “PHP isn’t so much a language as a random collection of arbitrary stuff, a virtual explosion at the keyword and function factory.”

If you are using Microsoft Windows, you are experiencing C++ first hand. First invented in 1983 as a replacement for the original C programming language, C++ is an incredibly popular choice for developers all over the world. As said above, C++ powers all Microsoft’s Windows versions including Windows 10 and Google Chrome. Some of the worlds most sophisticated fighter jets run on programs written in C++.

Short for “Cascading Style Sheets,” CSS is a programming language to design the format and layout of a website. It is not a functional programming language by itself but has a big part in how websites look. It is used in website menus and mobile-app menus are written with CSS, in conjunction with JavaScript and garden-variety HTML.

Pronounced “C-sharp,” as in the musical notation. C# is another variant of the original C programming language. Microsoft developed C# to power some of its products. It brings some Java-like ideas into how programming should be done.

C was the go-to language once upon a time but over the years it has lost its charm and popularity. The original C, invented in 1972, is still incredibly popular among the older generation of software developers. That’s not just because it works on just about any computing platform ever made, and it’s super stable and understood by programmers everywhere. In 1978, the language’s legendary and still widely read manual, the 800-page “The C Programming Language,” saw print for the first time.

Go programming language is the last on our list. Go was developed internally by Google to help its engineers build systems that got up to huge scales. Go has won acclaim from programmers of all kinds for its rock-solid reliability and stability. It is yet to join mainstream programming languages like C and Python but still has a committed developer community.