10 Inventors Killed By Their Inventions

The difference between humans and machines is that we think and take risks. But sometimes risk are too great and can cause fatalities. If you look at history, you will find those great inventions succeeded because the inventors dared to take a risk and challenge the society, religion and sometimes history.

Marie Curie was a French-Polish physicist and chemist who is famous for discovering a host of new elements, including radium and polonium, as well as the theory of radioactivity and the isolation of radioactive isotopes.

She was the joint winner of the Nobel Prize in 1903 along with her husband Pierre. She tragically died on July 4, 1934, from aplastic anaemia, almost certainly contracted from exposure to radiation. How exactly they affected Madam Curie is still not known but much of her work was carried out without radiation protection. She had carried test tubes containing radioactive isotopes in her pocket and stored them in her desk drawer, remarking on the pretty blue-green light that the substances gave off in the dark.

If there was one risk-taking inventor, it was Franz Reichelt. He is known as The Flying Tailor and is credited with inventing the coat parachute.  To prove that his coat parachute worked, he conned the keepers of the Eifel Tower to let him demonstrate.

On February 04, 1912, Franz held a major press venue so they could witness his inaugural jump. He leaped from the first deck and gravity took over. The tragic inventor’s death was captured on video and still lives on.

Thomas Midgley was an American chemist who invented both leaded petrol and CFCs. Though lauded during his time, he has come to be known as having “had more impact on the atmosphere than any other single organism in Earth history” and “the one human responsible for more deaths than any other in history” due to his inventions.

He contracted lead poisoning from continuous  exposure to leaded petrol and was left disabled in his bed. This caused him to create an elaborate system of pulleys and ropes in order to lift himself from bed. He died at the age of 55 after being strangled by one of his pulleys and is notable for the fact that both his inventions, leaded petrol and his pulley operated bed, contributed to his death.

Abu Nasr Ismail ibn Hammad a-Jawhari was a Muslim cleric, scholar, and a part-time inventor died around 1008 AD at Nishapur which is in today’s Iraq. His part-time invention includes a pair of feather-covered wooden wings to fly like a bird. To impress the Iman, Mr. A-Jawhari jumped off the roof of the mosque hoping they’d work. They didn’t and he died.

To commemorate the first known attempt at human flight, the village officials built a mosaic mural on the wall of the mosque.

William Bullock was an American inventor whose 1863 invention of the rotary printing press helped revolutionize the printing industry due to its great speed and efficiency.

In a bizarre accident, Bullock was killed by his own invention. On April 3, 1867 he was making adjustments to one of his new presses that was being installed for the Philadelphia Public Ledger newspaper. Bullock tried to kick a driving belt onto a pulley. His leg was crushed when it became caught in the machine. After a few days, he developed gangrene. On April 12, 1867, Bullock died during an operation to amputate the leg. He is buried in Union Dale Cemetery on Pittsburgh’s North Side.

Otto Lilienthal was a pioneer of human aviation who became known as the Glider King. A German pioneer in aviation, Lilienthal made over 2,000 glider flights and is credited with perfecting the gull-wing design and set the long-held record of soaring to 1820 feet. 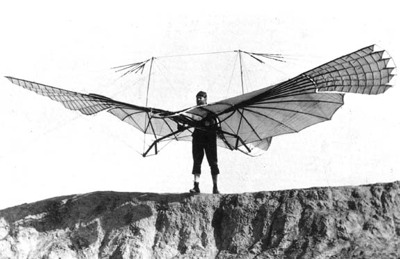 He was the first person to make repeated successful gliding flights. On August 10, 1896, Lilienthal experimented with “shifting weight” in a glider at fifty feet. It lost lift, stalled, and he augered into the ground, breaking his neck and spine. He died the next day.

His final words were, “Small sacrifices must be made!”

Alexander Bogdanov was a Russian physician, writer, politician, and a part-time inventor. He was jailed in the 1917 Bolshevik Revolution for his opposition to Vladimir Lenin. He somehow talked his way out of death row and back into medicine where he became obsessed with blood. He invented an original philosophy called “tectology,” now regarded as a forerunner of systems theory.

Continuing with his research on blood, Bogdanov founded the Institute For Haematology and was convinced that blood transfusion was the ultimate medicine to human ailments. To back up his beliefs, he used himself as a crash-test dummy and transfused blood from a patient suffering malaria and tuberculosis into his own system. He died two days later on April 07, 1928, but the patient slowly got better. It seems that the blood types were incompatible, something that was not known in 1917,

Max Valier was an Austrian rocket scientist who invented solid and liquid fueled missiles. Given his success with flight, Valier thought it’d be cool to make a rocket-propelled car. It worked, too, and he got it up to 250 mph. Trying to get even better, Valier experimented with alcohol as a combustible. That got away on him and blew up on his workbench, killing Valier and burning his workshop down.

Valier’s work, however, lives on. He helped found the German Verein für Raumschiffahrt (VfR – “Spaceflight Society”) that would bring together many of the minds that would make spaceflight a reality today.

Henry Winstanley was a famous English lighthouse architect and engineer who constructed the first Eddystone lighthouse. Two of his ships were wrecked on the Eddystone Rocks near Plymouth, and he demanded to know why nothing was done to protect vessels from this hazard. He was told that the reef was too treacherous to mark.  Winstanley declared that he would build a lighthouse there himself, and the Admiralty agreed to support him with ships and men. The Eddystone lighthouse was successfully completed and helped save many ships.

Winstanley was recorded as having expressed great faith in his construction, going so far as to wish that he might be inside it during “the greatest storm there ever was”. He got his wish. The tower was entirely destroyed on the night of 27 November 1703, during the Great Storm of that year. Winstanley was visiting the lighthouse that night to make repairs, and he lost his life.

Horace Lawson Hunley invented the submarine. He developed early hand-powered submarines, the most famous of which was posthumously named for him, H. L. Hunley.

His first prototype trapped seven sailors underwater and killed them all. Hunley went back to the drawing board and came up with a new and improved sub, aptly named the H.L. Hunley, which he skippered himself. On October 15, 1863, Hunley was testing the Hunley off the coast of Charleston, South Carolina, when it failed to surface and again killed the crew — including Hunley himself.