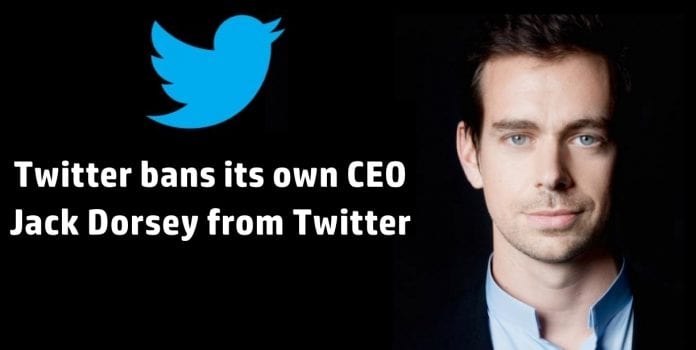 Twitter co-founder and CEO Jack Dorsey was suspended from Twitter for a short time today. Dorsey who operates the account under the handle @jack was removed from Twitter at around 9PM ET for reasons unknown. However, about 15 minutes later, his account was restored and resurrected without explanation.

The micro-blogging website had announced last week that it would be cracking down on hate speech, which included the suspension of numerous alt-right accounts. Although, Twitter in the past has been slow to suspend people for hate speech and harassment, it is basically quick to remove accounts that post obscene images or videos.

While the micro-blogging website has been slow to suspend people for harassment and hate speech in the past, it is usually quick to remove accounts that post obscene images or videos. However, the sudden strange disappearance of Dorsey’s account was noticed by quite a few people.

For a miraculous moment, I witnessed @jack having been suspended from his own shitty website

And it was a pure, perfect life. I miss it.

Just before 11PM ET, Dorsey subsequently returned to Twitter to tell his 3.4 million followers, that the suspension was “an internal mistake.”

Dorsey had replaced previous chief exec Dick Costolo before taking full charge of Twitter as CEO in October 2015. The past year has been a rough one for Twitter as it has failed to keep anyone on top of its product development, and has continued to axe employees after the post-profit biz.