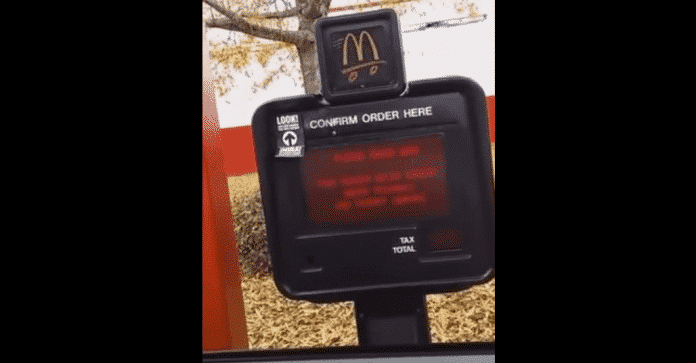 On a hungry afternoon, you want to eat a nice Mac Burger and decide to visit a McDonald’s drive-thru for a takeaway. Imagine your fright and anger when the drive-thru speaker tells you to [email protected]@k Off.

This is what happened to a drive-thru customer at a McDonald’s in North Carolina. He got a Big Mac shock when the voice from the order kiosk started belting out profanities instead of the normal politically correct ‘Hello, how may I help you!’ greeting.

The first response the customer heard was a man’s voice saying: “You know, I’m actually on the toilet right now and I’m just going to serve you your food. I’m not even going to wash my hands. “I’m trying to get some special sauce out right now.”

After a brief pause, the speaker added, “You know what just pull forward because I’m going to give you whatever the f*** I feel like giving you.”

After the video was posted on Facebook and YouTube, many other McDonald’s customers also noted their similar experience while many thought it was a joke. Posting the footage on Facebook after the incident, Dylan wrote: “So this happened today at the McDonald’s in New Bern, North Carolina. “Apparently someone hacked the headset of the poor girl working the window of McDonald’s.

The most plausible explanation for the profanities came from another commentator who said that a hacker may have hacked the McDonald’s speaker system to hijack the radio frequency. He added that the hacker may be sitting just metres away to belt out the vulgarities as soon as somebody drove through.

“As local owners, our biggest priority is our customers and community and we want to ensure that every experience at our restaurant is a positive one.”

At first, some thought it was a joke.

But the owner of the McDonald’s doesn’t.

“We are investigating this matter with the help of the new Bern Police Department.”