One thing that made Apple’s iPhones stand out was its iconic home button.The iPhone home button was a trendsetter in ways because even Android smartphones adopted it. However, Apple has now decided to dump this home button in its next iPhone 8. Apple’s next flagship smartphone, the iPhone 8 (also dubbed as iPhone X), will house a new “function area” at the bottom of the display, according to renowned Apple analyst Ming-Chi Kuo of KGI Securities.

In a note to investors obtained by AppleInsider, Kuo said Apple has decided to incorporate the “function” space on the screen due to the device’s bezel-less design, which it was unable to do before. The function area is mainly composed of virtual buttons and will replace the home button, which is present in the earlier generation of iPhones. Similar to virtual onscreen buttons, the feature could be much more dynamic and adaptive. 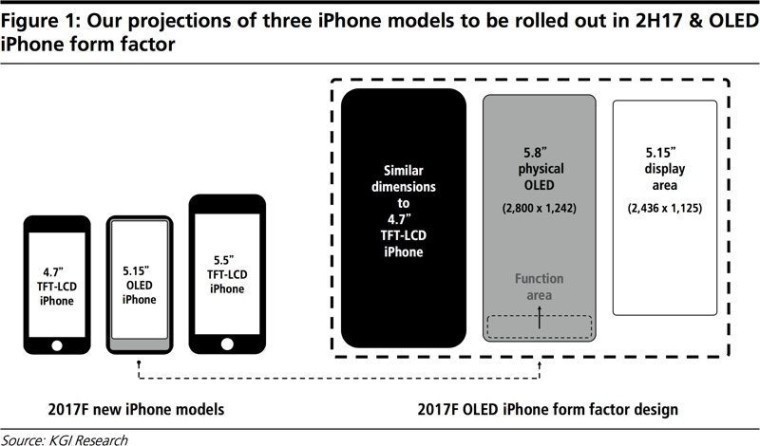 The device is expected to adopt a 5.8-inch energy-efficient high resolution OLED screen but will have only a usable surface area of 5.15-inches, as the rest of the screen will be used for the “function area,” with buttons that could change usage depending on the active app. It will feature a display similar in size to the 5.5-inch iPhone, but in a 4.7-inch package. New features expected in the new iPhone also include a bigger battery and wireless charging. Kuo believes that the iPhone 8 ‘will incorporate new bio-recognition assets to take over device security and Apple Pay authentication duties.’

Previous rumours suggest that Apple has been exploring the idea of including curved OLED screens for the 2017 iteration of the iPhone. Apple will introduce a new 3D sensing technology, which will be embedded in the display and be capable of reading fingerprints directly. There are also high chances that Apple might launch three different smartphones, two with LED screens and one with an OLED display.

We suggest you to take the new information with a pinch of salt, as there could be a lot of changes in the specifications before the final iPhone 8 is out. Keep watching this space for more info on the upcoming iPhone 8.