After the Ryzen 7 Zen microarchitecture, AMD recently announced the Ryzen 5, which also marks its entry into the mainstream market of gaming PCs. AMD has four members in the Ryzen 5 family scheduled to go on sale from April 11. 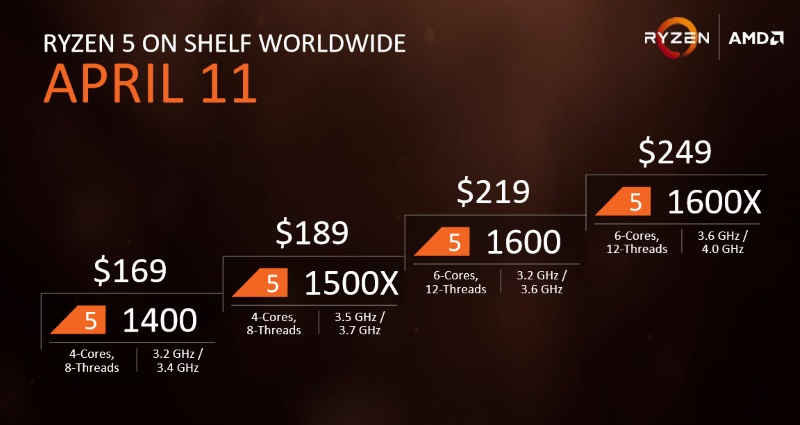 AMD’s Ryzen 5 processor line-up will work with the very same AM4 platform as the higher-end Ryzen 7.

Most Ryzen 5 processors sold at retail will also include AMD Wraith coolers. The 65W Ryzen 5 1400 will ship with a Wraith Stealth, while the Ryzen 5 1500X and 1600, which are also 65W processors, will include a Wraith Spire for high-ambient conditions. However, note that these coolers do-not feature built-in RBG light rings. Only the AMD Wraith coolers included with Ryzen 7 processors have the built-in lighting. Like the high-end Ryzen 7 1800X, the 95W Ryzen 5 1600X too will ship without a bundled cooler. AMD fully expects their Ryzen 7 and Ryzen 5 1600X offerings to appeal to enthusiasts who will go out and buy their own custom cooling solution. 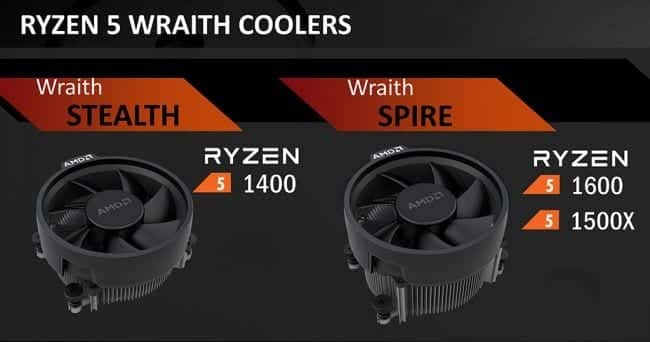 All the Ryzen 5 parts will support DDR4 ECC and non-ECC memory, and the memory support is the same as Ryzen 7, and will depend on how many modules and the types of modules being used.

Ryzen 5, both the hex-core and the quad-core variants, will use the same eight-core base Zeppelin silicon that Ryzen 7 does. The silicon design consists of two core complexes (CCX) of four cores a piece, and each with 8MB of L3 cache that is an exclusive victim cache. Moving down-market from the 6-core Ryzen processors are the quad core, eight thread Ryzen 5’s. In an effort to maintain some separation between their product series, AMD is seen manipulating frequencies. The 1500X still uses a pair of enabled CCXs, but with a pair of cores on each disabled, despite it using a different product name. That means it still receives a full 16MB allotment of L3 cache. In the meantime, the 1400 part only has 8MB cache.

It will be interesting to see how Ryzen 5, which is more targeted towards mainstream gamers and users perform and also how the core counts and frequency will affect gaming performance.