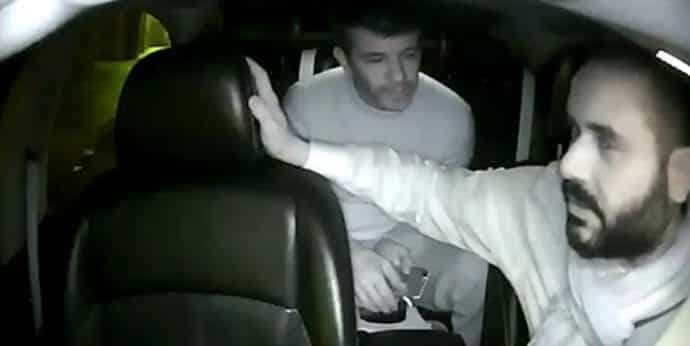 Travis Kalanick, CEO of Uber on Tuesday got into a heated argument with a driver on falling fares according to a report by Bloomberg.

During the ride—booked through Uber Black, the company’s high-end service—one of Kalanick’s companions makes mention of Uber having a hard year.

As the ride appears to come to an end, Kamel tells the riders to “have a good one.” Kalanick responds as if he is familiar with the driver, stating, “Good to see you man.” At that point Kamel begins a conversation with Uber’s CEO about the plight of driving for the company.

“I don’t know if you remember me, but it’s fine,” Kamel says, before the two start talking about Uber’s black car service.

In the video, which was published by Bloomberg, the driver in a dash cam tells Kalanick that “people are not trusting you anymore,” and complains that rates for drivers have fallen.

Further, Kalanick is shown arguing with his driver over fares. Later, the argument gets heated and ends with Kalanick telling the driver to stop blaming Uber for his problems.

“Some people don’t like to take responsibility for their own s**t. They blame everything in their life on somebody else.” Kalanick said as he got out of the car and slammed the door. “Good luck!”

After this incident and when the video went viral, Kalanick issued an apology on Tuesday night. “By now I’m sure you’ve seen the video where I treated an Uber driver disrespectfully,” Kalanick wrote on Uber’s blog. “To say that I am ashamed is an extreme understatement. My job as your leader is to lead…and that starts with behaving in a way that makes us all proud. That is not what I did, and it cannot be explained away. It’s clear this video is a reflection of me – and the criticism we’ve received is a stark reminder that I must fundamentally change as a leader and grow up. This is the first time I’ve been willing to admit that I need leadership help and I intend to get it.”

This incident just adds to what has already been a relatively rough couple of months for Uber , which involves everything from the company being sued by Alphabet Inc’s self-driving vehicle unit Waymo Uber for allegedly stealing designs related to autonomous vehicles, to the resignation of a top exec to allegations of sexual harassment to internal leaks detailing a chaotic companywide culture of sexism and unprofessional business practices.