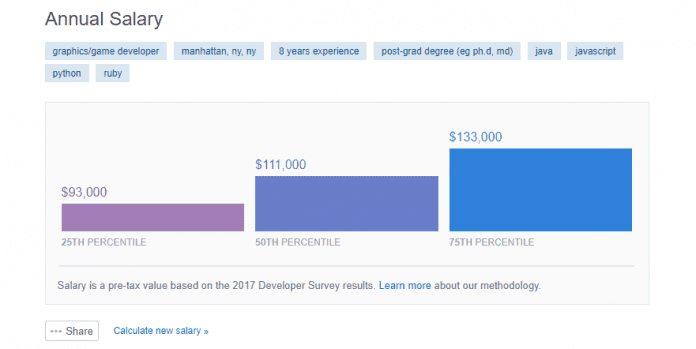 Stack Overflow, the popular developer community that offers a question-and-answer site for coders, has unveiled a new salary calculator that lets developers know how much they should be earning on the basis of role, location, education level, experience, and areas of expertise.

Called the Stack Overflow Salary Calculator, this is based on a survey that the company conducted earlier this year, which saw about 65,000 developers respond to a variety of questions.

“We did this because we believe developers should be empowered with more information around job searches, careers, and salary. In fact, we know that developers want more salary information to make better choices about their careers.”

One of the biggest factors in how much a developer is paid is where she or he lives and works, says Stack Overflow. For instance, the median salary in the U.S. is considerably higher than in Canada, Germany, UK or France. Based on Stack Overflow’s data, a developer with five years of experience could earn, on average, around $34,000 more in the U.S. than in Canada, Germany or the UK and $47,000 more than in Germany.

Not only this, there is a visible difference in salaries between major cities in the same country. For instance, where a backend Java developer with no Bachelor’s degree and one year of experience can earn between $66,000 and $94,000 in New York, the same developer could earn between $74,000 and $105,000 in San Francisco. The calculator also offers an optional technologies field with tags for key technologies, frameworks and platforms.

Stack Overflow also found that developers who use React.js or Amazon Web Services (AWB) professionally get an increase in the salary.

The new developer salary calculator currently covers developer pay in the U.S., Canada, the UK, France, and Germany, and seven major cities — Toronto, Paris, Berlin, New York, San Francisco, Seattle and London. However, the company has plans to expand the calculator to India and other countries in the future.

This is just the first version of the calculator. Stack Overflow is asking developers to share their salary directly in the tool.

“We are committed to improving the accuracy and granularity of this calculator. You can help us improve the calculator by confidentially sharing your salary with us in the calculator. We will use your salary information in modelling, but your salary is 100 percent private and will never appear on your profile or be shared with employers,” Julia Silge, a data scientist at Stack Overflow wrote in a blog post.

“We believe strongly that more transparency and more information is empowering for both sides,” Silge explained. “We want developers to use it as a way to find out what they could be making and we want our clients, who are companies [that are] hiring, to be able to use it to understand what would be normal for them to be paying. We want it to be a two-sided tool.”

You can try out Stack Overflow’s salary calculator here.