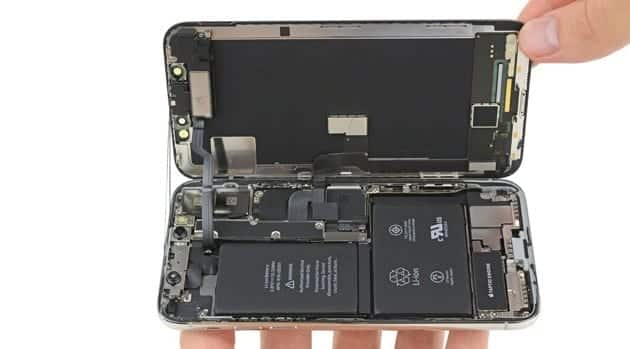 The much anticipated Apple’s 10th-anniversary smartphone, iPhone X finally went on sale on November 3 with fans across the globe waiting to get their hands on it. The steep price of the smartphone has not deterred people from queuing up at Apple retail stores, which only indicates the huge demand for the iPhone X.

In the meantime, iFixit, a company known for “teardowns” of consumer devices, decided to cut and take apart the iPhone X to see what new does the smartphone has to offer to its users and better understand its internal structure.

The most interesting part in the teardown of the internal components in iPhone X is Apple’s new TrueDepth Camera system on the front of the device, which is also a myriad of sensors for Face ID authorization and Animojis. The teardown reveals that the TrueDepth camera has three main components: Infrared Camera, Flood Illuminator and Dot Projector. While the flood illuminator embedded in the centre of the display blasts the user’s face with about 30,000 infrared (IR) rays, the front-facing camera on the left confirms the presence of a face, that allows the IR dot projector on the right of the camera to project a grid of dots on the user’s face to create a three-dimensional (3D) map. The IR camera on the left reads this map, and sends the deduced data to the smartphone for authentication.

Further, the teardown of iFixit reveals that the iPhone X has not one but two battery cells to save space inside the smartphone. The new L-shaped two-cell battery pack provides a combined output of 2,716 mAh, which is even larger than the 2,691 mAh unit on the iPhone 8 Plus. It also noted that the iPhone X logic board which is about 70 percent of the size of the iPhone 8 Plus logic board is more dense with connectors. Apple has stacked circuit boards on top of each other to save space inside the device.

Just like the iPhone 8 and iPhone 8 Plus, the iPhone X rear shell too is affixed with an inductive charging coil based on the Qi standard. The teardown also shows other components in the iPhone X such as Apple’s A11 Bionic chip, the 3GB LPDDR4x RAM by SK Hynix, 64GB of storage supplied by Toshiba, Qualcomm’s Snapdragon X16 LTE modem, and a Cirrus Logic audio amplifier.

iFixit has assigned 6 points for repair of the iPhone X, which means that it is at a relatively moderate level in terms of repairing or replacing components when damaged. While the cracked display can be replaced without removing the biometric Face ID hardware, the fussy cables tie unrelated components together into complex assemblies, which make it very expensive and troublesome to replace.