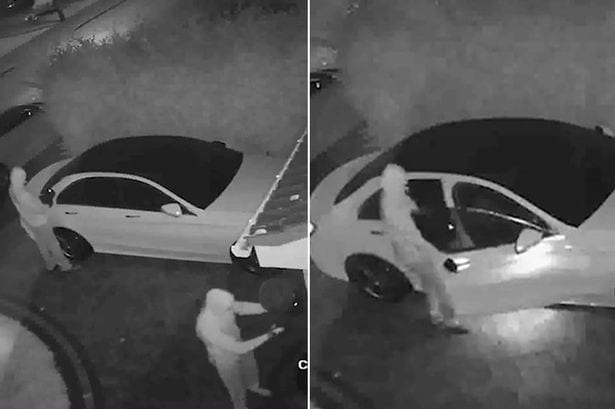 It just took 60 seconds for hi-tech thieves to unlock a pricey Mercedes-Benz without keys and that too without breaking or damaging the car, shows a CCTV footage released by West Midlands Police, England. Police say the footage is the first ‘relay crime’ caught on camera in the West Midlands.

The video footage shows two men arriving at the male victim’s house in a car at 9 pm carrying “relay boxes” on September 24. One of them approaches the front door with a relay box in his hand and then waves the device at the front door of the house, and the car gets unlocked. The crooks then drive off with the Mercedes-Benz.

So, how did this happen? Apparently, the relay boxes are designed to receive a signal from the car key through walls, doors and windows. Therefore, when the relay box was waved at the front door, it stole the signal of the auto keys, which was likely in the house and transmitted it to the second box next to the car. It just took less than one minute to trick the vehicle’s systems to think that the key is present and subsequently unlocking it.

Police are yet to recover the Mercedes-Benz was stolen by the thieves from a driveway in the Elmdon area of Solihull, West Midlands.

Mark Silvester, from the West Midlands Police crime reduction team, advised people on how they could protect their cars against the theft.

“To protect against this type of theft, owners can use an additional tested and Thatcham-approved steering lock to cover the entire steering wheel.

“We also recommend Thatcham-approved tracking solutions fitted to the vehicle.

“It is always worth speaking to your main dealer, to ensure that your car has had all the latest software updates and talk through security concerns with them.”

Sergeant Tim Evans, of Solihull Police, said: “It’s important the public are reassured that we are taking proactive steps to tackle this type of crime in Solihull.

“We hope that knowledge of this type of crime will enable members of the public to take simple steps to secure their vehicle and assist us.”