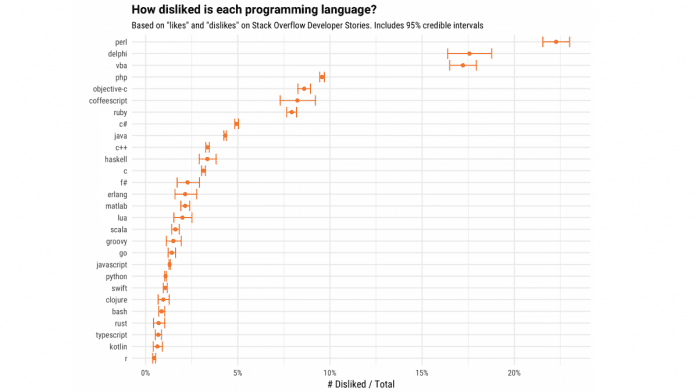 Top 10 programming languages that developers hate the most

In a new analysis carried out by Stack Overflow, Perl emerged as the most disliked programming language among developers followed by Delphi and VBA. For those unaware, Stack Overflow, is a popular developer community that offers a question-and-answer site for coders and developers.

Stack Overflow data scientist David Robinson used the site’s “Developer Story” feature in its analysis, where developers have added tags for languages, operating systems, platforms, and libraries they would want to work with and prefer not to work with. It then compared those “dislike” tags with “like” tags that helped them collect data of the most unpopular programming languages through some data science analysis.

“As a measure of how polarizing each tag is, we’ll look at what fraction of the time it appears in someone’s Disliked tags compared to how often it appears in either someone’s Liked or Disliked tags,” said SO data scientist David Robinson in a blog post on Tuesday. “Thus, 50 percent would mean a tag was disliked exactly as often as it was liked, while 1 percent means there were 99 people who liked it for each one who disliked it. (We used the empirical Bayes method I describe in this post to estimate these averages, and this method to calculate 95 percent credible intervals).”

According to developers on Stack Overflow, given below are the top 10 most disliked programming languages:

“The most disliked languages, by a fairly large margin, are Perl, Delphi, and VBA,” Robinson said. “They’re followed by PHP, Objective-C, CoffeeScript, and Ruby.”

Some of the most liked programming languages included: R, Python, Typescript, Go and Rust, which could be because they are the fast-growing in terms of activity, notes Robinson.

Robinson said usually there’s a correlation between how fast a particular tag is growing and how often it’s disliked. However, “we’re not necessarily suggesting a causal relationship, where tags being disliked by a component of programmers leads to them being abandoned,” he wrote. “Another possibility is that people feel comfortable expressing their dislike publicly if they sense that the language is already shrinking in popularity.”

Robinson added, “Almost everything disliked by more than 3 per cent of Stories mentioning it is shrinking in Stack Overflow traffic (except for the quite polarizing VBA, which is steady or slightly growing). And the least-disliked tags – R, Rust, TypeScript and Kotlin – are all among the fast-growing tags (TypeScript and Kotlin growing so quickly they had to be truncated in the plot).”

“It’s worth emphasizing again that this is no indictment of the technologies, their quality, or their popularity. It is simply a measurement of what technologies stir up strong negative feelings in at least a subset of developers who feel comfortable sharing this publicly,” Robinson wrote.