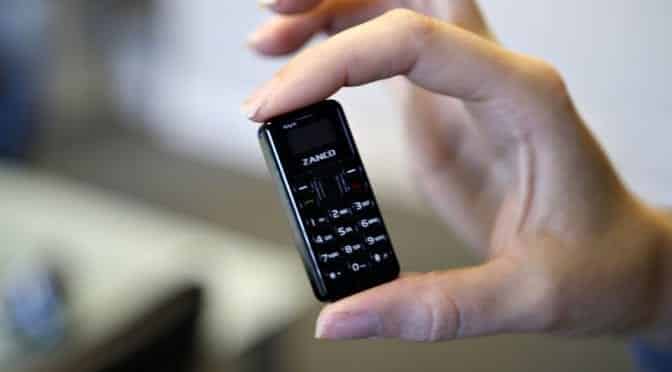 At a time, where the screen size of smartphones are getting bigger and having bezel-less look, an UK-based company has come up with the world’s smallest mobile phone that is the size of a thumb.

Called “Zanco Tiny t1”, the phone has been developed by Clubit New Media, an 18-year-old company involved in retail and wholesale distribution of video games, collectibles, novelty gifts and gadgets. Zanco tiny t1 has been listed on a Kickstarter campaign.

“The creation of the Zanco Tiny T1 was motivated purely by the challenge of whether or not it was possible to create a phone so small,” Robert Lattibeaudiere, operations manager at creators Clubit New Media, told Digital Trends. “In the immortal words of Jeff Goldblum, ‘We spent so long figuring out if we could, we never stopped to ask if we should.’”

The phone comes with 0.49 inch (12.mm) OLED display along with 64×32 pixels resolution. It is powered by a 200mAh battery, which will give users three days of standby time and up to 180 minutes of talk time. The device is powered by a MediaTek MTK6261D motherboard paired with 32MB of onboard storage. The tiny phone comes with an alphanumeric keyboard below which there’s a mic and a loudspeaker. The Zanco tiny t1 measures 46.7x21x12mm and weighs around 13 grams.

Branded as a ‘talk and text mobile phone’, Zanco’s tiny t1 can store up to 300 phone  numbers and 50 text messages, which means it will allow users to make calls and send text messages. However, it does not support internet browsing or games due to space constraint. It accepts a Nano SIM, has Bluetooth connectivity and can be charged using a Micro USB. The tiny phone only operates on the 2G network and not support for 3G or 4G frequencies. The tiny t1 is a quad-band phone and is available in two 2G band frequencies – 850/1900 and 900/1800. The device works with any mobile phone network and the Nano-SIM can be changed at any time if the user wants to change his or her network.

Currently, the Zanco Tiny T1 is a fully functioning prototype, and is ready to go into mass production, assures Lattibeaudiere. “Once the Kickstarter has ended it will only be an estimated 14 weeks to produce and deliver to backers,” he said. “It has taken 2 years of research and development to get to this point. The Kickstarter is to ascertain if the world is ready for a phone so small.”

Zanco is currently running a Super Early Bird offer and the tiny t1 comes at a price tag of EUR 30 (approx Rs. 2,280). The phone is expected to start shipping to most countries in the world in May 2018.