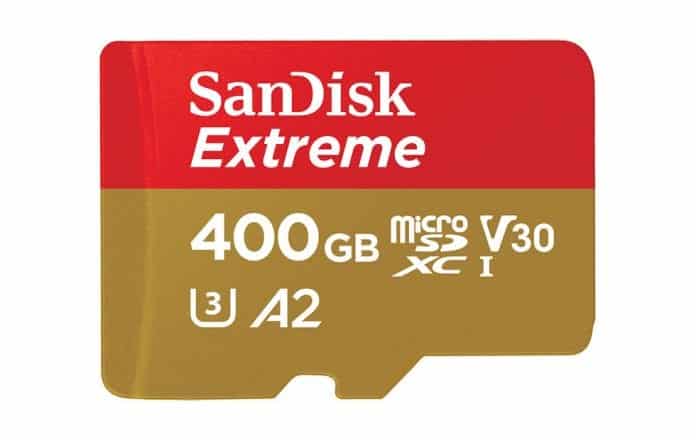 The company’s new 400GB SanDisk Extreme UHS-I microSD card is designed to help consumers move their high-quality content faster than ever. With read speeds of up to160MB/s, the new card is more than 50 percent faster than current SanDisk Extreme UHS-I microSD cards, making it ideal for use in high-end Android smartphones, action cameras and drones. It also offers extreme speeds and fast transfer for 4K Ultra HD video. However, the write performance is less striking at “just” 90MB/s.

According to the company, these “unprecedented” speeds are possible due to leveraging of Western Digital proprietary technology. The card will also feature the A2 specification, which demands a minimum random read speeds of 4,000IOPS, a minimum random write of 2,000IOPS, and a minimum sustained read speed of 10MB/s to help launch and load apps at blazing speeds.

Jim Welsh, Senior Vice President and General Manager, Client Solutions, Western Digital, said “Consumers expect an increasingly better mobile experience, and with our 3D NAND technology, we are pushing the boundaries of innovation to enable them to create and enjoy more rich content on their devices. Our expertise in flash memory and microSD card electronics enables us to achieve unmatched performance. The breakthrough SanDisk microSD card is evidence of Western Digital’s commitment to delivering more advanced solutions that enable data to thrive.”

The company says it is “ideal for recording outdoor adventures, weekend trips, or sporting events without skipping frames. The 400GB1 SanDisk Extreme microSD UHS-I card lets you capture uninterrupted 4K UHD and Full HD video with its UHS Speed Class 3 (U3) and Video Speed Class 30 (V30) ratings.”
Also, a copy of the RescuePRO Deluxe data recovery software is provided to the owner to recover any files that are accidentally deleted. Further, the card is waterproof, dustproof, shockproof, X-ray proof and can function in a wide range of temperatures between -13ºF and 185ºF (-25ºC to 85ºC).

The new 400GB microSD – the fastest SD card, is expected to cost you $300 for its largest capacity.

In addition, Western Digital also showcased its PCIe-enabled SD card at the MWC 2018, which the company is calling “the future of flash memory card technology”. The company claims that the technology can now be demonstrated to boost the performance of SD cards. A single-lane of the PCIe Gen 3.0 standard offers speeds of up to 985MB/s that are essential for high-resolution content applications such as super-slow-motion video, RAW continuous burst mode and 8K video capture and playback. Generally, the PCIe technology has been reserved for high-performance data center system