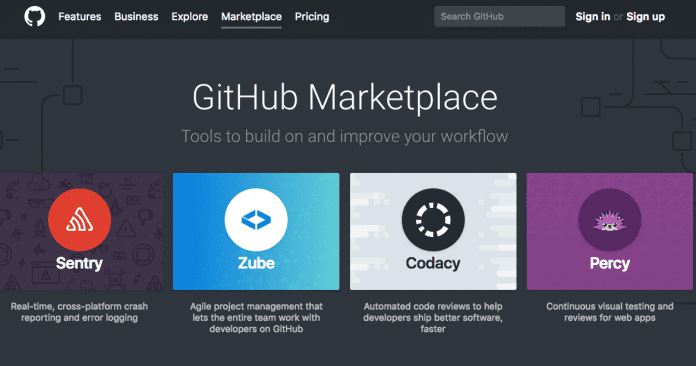 Developers can now upload apps to the Github Marketplace for free

GitHub, a source code management platform, is celebrating first anniversary of its GitHub Marketplace, a developer-focused app store, by opening the marketplace to more developers. It is allowing anyone to list their app along with a free product on the marketplace without having to pay.

For those unaware, GitHub had released GitHub Marketplace last year to promote, share, and sell the developer tools built on GitHub and to also create a single destination for developers community to discover the apps and services they need without setting up multiple accounts or payment methods. The Marketplace is divided into five different categories, including code quality, code review, continuous integration, monitoring and project management. Also, the platform offers support for several popular apps like Travis CI, Sentry and Waffle.

Currently, GitHub Marketplace has more than 100,000 users and offers almost 50 different tools that makes it easier for the developers to build apps and help them build a business. In the past one year, GitHub Marketplace has managed to attract products from the likes of Travis CI, BackHub, ZenHub and Microsoft for its platform. By opening the marketplace to everyone and allowing users the flexibility to use third-party services, GitHub is looking not only to grow its marketplace but also have a competitive edge over rival products, like Atlassian’s Bitbucket and Gitlab.

In April, instead of making the users wait for manual approval to include themselves on the platform, it allowed them to do it on their own. It has also introduced free trials of paid apps for developers that lets them try app free for 14 days to ensure that they are selecting the right tool for their team. According to GitHub, by supporting a free trial, can increase developers’ revenue by 43 percent. Additionally, apps that offer free trials now account for more than 60 percent of Marketplace’s revenue.