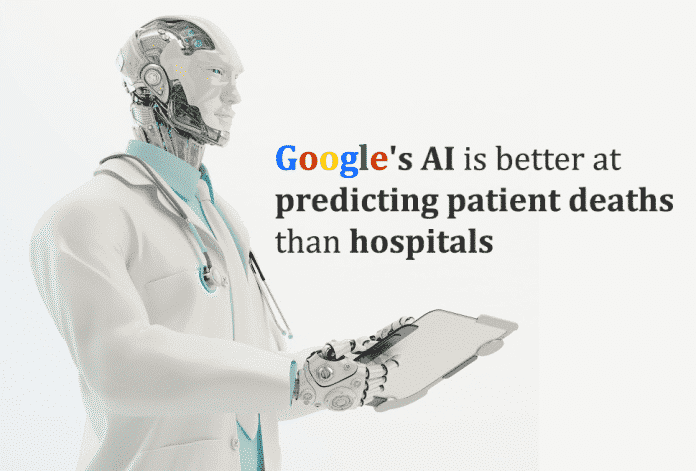 Google AI can help doctors predict when patients might die

Google’s findings were published in the Nature partner journal Digital Medicine in May. In one major case study in the research, Google applied its neural networks, a form of AI, on a woman with cancer who had arrived at a city hospital with late-stage breast cancer, fluids already flooding in her lungs. The hospital’s Early Warning System predicted that the woman had a 9.3% chance of dying during her stay, while Google’s AI said the risks of death were higher at 19.9%. Unfortunately, the woman passed away less than two weeks later.

“These models outperformed traditional, clinically used predictive models in all cases. We believe that this approach can be used to create accurate and scaleable predictions for a variety of clinical scenarios,” the company researchers wrote in the research paper.

To make its predictions, the software analyses patient’s data such as ethnicity, age, gender, previous diagnosis, lab results and vital signs. In this case, Google’s AI analyzed the 175,639 data points found in the patient’s electronic medical records, which included interpreting and evaluating handwritten notes. The inclusion of all this information is what makes this AI different from previous traditional methods.

“In general, prior work has focused on a subset of features available in the EHR, rather than on all data available in an EHR, which includes clinical free-text notes, as well as large amounts of structured and semi-structured data,” the research paper reads.

What particularly impressed medical experts the most “was Google’s ability to sift through data previously out of reach: notes buried in PDFs or scribbled on old charts.

Google research scientist and medical doctor Alvin Rajkomar MD, said: “When patients get admitted to a hospital, they have many questions about what will happen next. When will I be able to go home? Will I get better? Will I have to come back to the hospital? Predicting what will happen next is a natural application of machine learning.”

This new AI technology can help doctors make better diagnosis and be a real boon to hospitals, ultimately resulting in improved patient care.

Although the system is still in its initial stages, Google believes it could someday be used to predict death much longer in advance. Google also wants to work on AI tools that can predict not only death risk, but also symptoms and diseases.

The AI has been developed in collaboration with colleagues at UC San Francisco, Stanford Medicine and The University of Chicago Medicine.