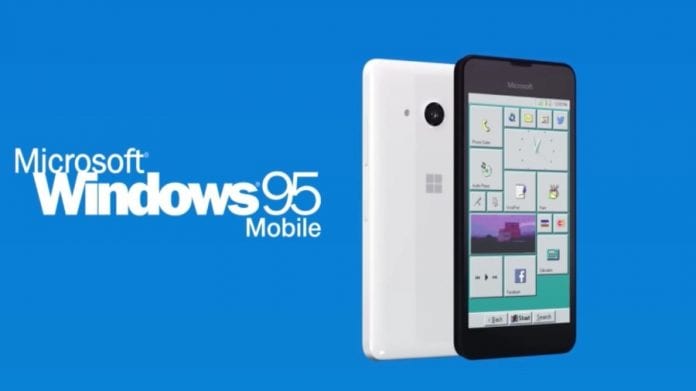 Blast from the past: Re-imagined Microsoft Windows 95 Mobile includes Clippy

Most of you from the 1990s era, must have surely witnessed the arrival of Windows 95, which was Microsoft’s first large, stable, and most complete operating system among those that had been distributed to personal computers during that period.

Being brought up in the 1990s, Windows 95 was the first ever operating system that I worked upon and till date I feel nostalgic about it. Windows 95 not just a graphical user interface running on top of MS-DOS. The operating system brought many new features such as improved windows control and appearance of windows, new introduced desktop, right button menu, new help system, taskbar and start menu, the way the user navigates, build-in network support with dial-up for different protocols, folder view of all kinds of files and resources, support of 32-bit application, and pre-emptive multitasking and thread.

After running successfully for three years, Windows 95 was succeeded by Windows 98. Ironically, the Windows Mobile for phones could not meet the same fate. Facing competition from rival mobile OSs, including Apple’s iOS and Android, Microsoft’s Windows Phone is finding it difficult to find a hold in the market. It’s been more than two years that Microsoft has launched a Windows Phone.

In the above video, you can see classic-looking Windows 95 icons like “Internet Mail,” “Internet News,” “Audio Player” and the first version of “Internet Explorer”. It also shows Windows 95’s iconic start button, old-school version of Microsoft Word, clipart, gray boxes, and extensive drop shadows. Besides these, it also shows the bugs and their own versions of Skype, WhatsApp and YouTube. The one feature in Windows 95 Mobile that takes the cake is the Clippy wizard that can even rival Siri.

Do watch the video above and do let us know what you think about the mobile version of Windows 95 on a smartphone in the comments section below.