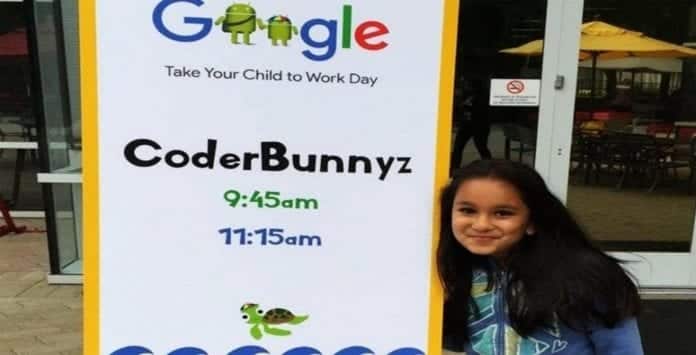 This successful 10-year-old coder is a Silicon Valley sensation

Meet Samaira Mehta, a 10-year-old Silicon Valley girl, who has a “cult-like following” because of her success as a computer programmer, reports Business Insider.

This young programmer who is the CEO and founder of a company called CoderBunnyz has received national media recognition for her company. She has also spoken at nearly a dozen Valley conferences (and counting).

How did it all start?

Samaira had started computer coding from the age of six. However, it all happened for her at the age of eight when she created a game called CoderBunnyz to help teach other kids how to code.

The board game created by Samaira won her second place in Think Tank Learning’s Pitchfest in 2016 and also a prize money of $2,500. This caught the attention of some Cartoon Network advertisers looking to feature young inspiring girls as real-life “Powerpuff Girls.” Things took flight when she featured in one of those videos.

Samaira was featured on some broadcasts and started selling her game on Amazon.

“We’ve sold 1,000 boxes, so over $35,000 and it’s only been on the market for one year,” the exuberant and adorable Samaira told Business Insider.

Samaira’s successful promotion of her CoderBunnyz game was not an accident. Her father Rakesh Mehta (an Intel engineer and Sun Microsystems/Oracle alum) assisted her in creating a killer marketing plan for the game’s launch.

Samaira conducts coding workshops for school-aged kids where everyone plays the game she created. She has also launched an initiative called Yes, 1 Billion Kids Can Code that allows interested people to donate game boxes to schools. She then keeps workshops at those schools to help kids learn how to master the game.

In the beginning of this school year, 106 schools were using the game to teach kids to code, Mehta says.

“In the world, there are over 1 billion kids,” she said. “There are people who are willing to donate Coder Bunnyz boxes to schools, and to people in need all over the world, who want to learn coding.”

Samaira’s game became so successful that she launched a sequel called CoderMindz that teaches kids how to code using artificial intelligence (AI). She developed this game with the help of her 6-year-old brother, Aadit. CoderMindz is being touted to be the first ever AI board game to come to market.

CoderMindz will focus on teaching children basic AI principals, concepts like training an AI model, inference, adaptive learning. This can be eventually used by kids to develop robots.

The game’s success saw Samaira conducting workshops (over 60 of them) in Silicon Valley (for more than 2000 kids) until now, she says.

“After my back-to-back workshops at Google headquarters, we talked for an hour. She told me I was doing great and once I get out of college, I can come work for Google,” Samaira said.

Besides Google and many other companies, Samaira also gave a presentation at Microsoft and at the Girls’ Festival sponsored by World Wide Women earlier this month.

While a lot of companies like Google and Microsoft have their eyes on this young coder, she isn’t sure what her plans are or if she’d like to work for these companies in the future.

Other than giving speeches and presentations at bigwigs like Google and Microsoft, she also met a lot of other big names. One of her proudest moments was receiving an encouraging letter from Michelle Obama in response to a letter she had written back when Obama was still the First Lady.

Samaira went trick-or-treating in Zuckerberg’s neighborhood and stood in “a super long line” at his house for an opportunity to meet him. “I finally got to meet him. He was handing out chocolates. I told him I was a young coder and he told me to keep going, you’re doing great,” she told Business Insider.

She has now launched her own interview series on her CoderBunnyz website where she has conversations with people in the game, robotics, and education sectors.

The young coder is reinvesting all the money earned from her business into manufacturing more CoderBunnyz games and creating the new AI game. She has already chosen a charity called “PATH” to donate profits from her business.

“It ends homelessness and helps people rebuild skills and I care about homeless,” she says.