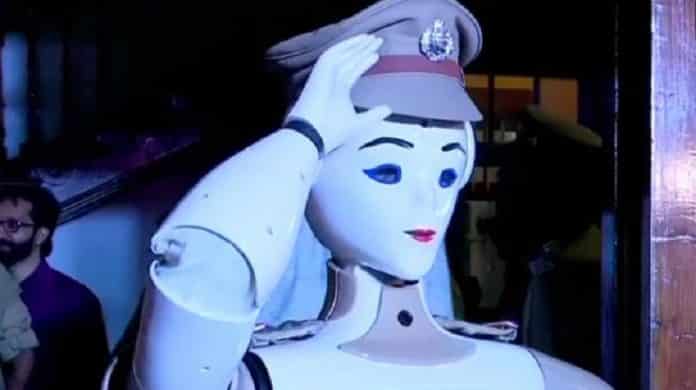 Anyone visiting the police headquarters in Thiruvananthapuram, Kerala will now be greeted by a humanoid robot, as India has launched its first ever robocop in its police force on Tuesday. This is the first police department in the country to use a robot for police work, according to India Today.

The humanoid robot named KP-Bot has been developed by the Kerala Police Cyberdome with the help of a Kochi based start-up, Asimov Robotics Pvt Ltd. The robocop will be managing the front office of the headquarters in Vazhuthacaud.

Pinarayi Vijayan, the Chief Minister of Kerala inaugurated the humanoid police robot at the police headquarters in the state by giving it an honorary salute. To which, the robocop responded with a perfect salute.

Kerala: CM Pinarayi Vijayan inaugurated KP-BOT, first humanoid police robot in India, yesterday in Thiruvananthapuram. The robot will perform duties of the front office of police headquarters. It'll receive the visitors & direct them to different places according to their needs. pic.twitter.com/GySUw6RYZ5

The Robocop who has been given Sub Inspector (SI) ranking will receive the visitors and direct them to the appropriate department as per their needs. It can also salute at higher-ranked officers. However, KP-Bot will require to undergo a month’s before being posted at the police headquarters.

The cause of women empowerment and gender equality were the reason why KP Bot is considered female – a “she” robot.

“Women empowerment and gender equality were kept in mind while deciding on the gender of the first robot. Also, the fact that most front office jobs are managed by women was considered,” Loknath Behra, Director General of Police (DGP) said.

“At present, about four persons are required to do the front office duty. Now, it would be managed by the KP-Bot,” added the DGP.

With the use of facial recognition technology, KP-Bot can also record a person’s information. Once all the data is filled, it can also help in recognizing a criminal.

Jayakrishnan, CEO of Asimov Robotics Pvt Ltd, who led the technical team, says that the Robocop is a result of two months of hard work. “We became part of the project through Kerala Start-up Mission. The aim was to create a robot with versatile mobility and that can interact autonomously. The KP-BOT is designed to greet, guide and launch. As part of its launch, we had only given it basic training on greeting high-ranking police officials such as the DGP with a salute and self-introduction,” he says.

However, the sub-inspector will also be trained by feeding database on case files, identity information, face-and-voice detection of the public, and responding to these, he explains. “In the next phase, we will be training KP-BOT to recognize and respond to Malayalam speech. There would be various kinds of petitioners, and so she would be trained in understanding their emotional state of mind and also in booking those who attempt to bribe her,” Jayakrishnan says.

In the future, there are plans to update the Robocop with additional sensors such as metal and IED detectors, gas sensors along with thermal imaging to handle the safety and security concerns of human officers and workplaces.