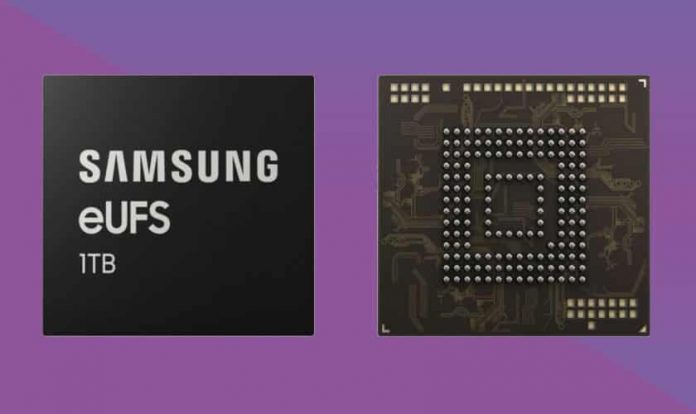 According to Samsung, “the new Universal Flash Storage offers 20x more storage than a 64GB internal memory and 10x the speed of a typical microSD card for data-intensive applications.”

Many of the Android phones include a microSD slot that allows users to expand the internal storage capacity of their device. With the new 1TB eUFS, users will now be able to enjoy storage capacity comparable to a premium notebook PC, without having to pair their phones with additional memory cards.

“The 1TB eUFS is expected to play a critical role in bringing a more notebook-like user experience to the next generation of mobile devices,” said Cheol Choi, EVP of Memory Sales & Marketing at Samsung Electronics.

“What’s more, Samsung is committed to assuring the most reliable supply chain and adequate production quantities to support the timely launches of upcoming flagship smartphones in accelerating growth of the global mobile market.”

The new 1TB eUFS measures just 11.5mm x 13.0mm. Besides the huge memory capacity, the 1TB eUFS also possesses exceptional speed. Samsung claims that the chip will offer up to 1,000 megabytes per second (MB/s) in terms of sequential read speeds, which is approximately twice the sequential read speed of a typical 2.5-inch SATA solid state drive (SSD), and up to 260MB/s in sequential write speeds.

This new chip allows smartphone users to store 260 10-minute videos in 4K UHD (3840×2160) format, in contrast to the 64GB eUFS chip mostly used in many current high-end smartphones that can only store 13 videos of the same size.

In December 2017, Samsung had begun mass-producing its 512GB storage chips, which was later included in the company’s premium Galaxy Note9 smartphone. Presuming a similar rollout, we could likely see Samsung’s upcoming Galaxy S10 come with a 1TB storage capacity option.