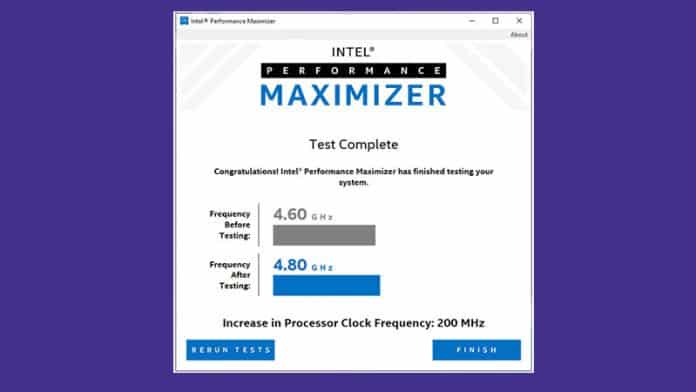 Intel has now finally released its own auto-overclocking tool called “Intel Performance Maximizer” (IPM) that gives your Intel CPU an additional boost with just one-click. It is specially designed for those who are new to overclocking, or for those who are not comfortable with manually tweaking voltages and memory timings.

Intel describes the tool as “hyper-intelligent” and says that it has the ability to analyze the “performance DNA” of each individual processor and programs personalized settings for custom overclocking.

The company says that the tool also has an additional ‘dynamic overclocking’ option that makes changes to performance over time in reply to things like heat and system load.

Additionally, you will also require a motherboard with a Z390 chipset, at least 8GB of RAM, 16GB of available space on an internal drive, and Windows 10 1809 or newer.

So, how does the IPM work? PCPer who got a pre-release copy of IPM from Intel reviewed the tool using an Intel Core i9-9900K-based PC system.

The site mentioned: “IPM automatically increases clock speeds in small steps, testing after each change to ensure stability. It repeats this process until there’s a crash or error, at which point it drops back down to the previous clock or multiplier setting, tests for stability again, and then starts to tweak other factors such as voltage.” The process is repeated until the tool finds a maximum safe overclock which may take up an hour or more.

While Intel is confident that its new tool will be able to safely overclock your chip; however, if the CPU somehow gets damaged due to overclocking and is not able to work properly, the company offers a one-time replacement.

Also read– Linux Powers All Top 500 Supercomputers In The World

Although the older-Gen unlocked CPUs are not compatible with the tool’s initial release, we are hoping that Intel will be able to expand the feature in the near future.