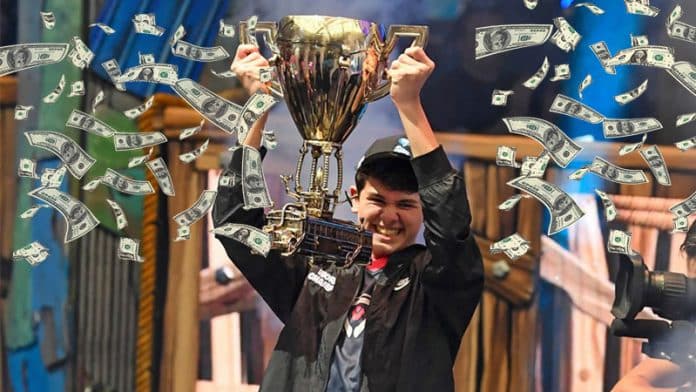 A 16-year-old teenager from Pennsylvania hit a jackpot after he won the title in the first-ever Fortnite World Cup championship held at Arthur Ashe Stadium in Queens, New York on Sunday. He took home the $3 million grand prize in the solo division, which is also the biggest payout for an individual player in an e-sports tournament.

“Emotionally, right now, I don’t feel too much, except I know that this could pretty much change my life forever,” the teen Kyle Giersdorf aka ‘Bugha’ said. “It’s just absolutely unreal.”

After securing 59 points, @bugha is your first ever #FortniteWorldCup Solo Champion! ?? pic.twitter.com/O5WAcVvjRA

For those unaware, ‘Fortnite: Battle Royale’, the insanely popular free-to-play battle royale game released in 2017 by developer Epic Games has 250 million users worldwide. It is a colorful and cartoony style game where 100 players drop onto a huge map and then fight to the death with the last player standing to win a Victory Royale.

Giersdorf was one of at least 100 players who were competing for $30 million in total prize money over the weekend in duo and solo matches.

To qualify for the Fortnite World Cup finals for solos, the players had to compete in six games from a pool of the top 100 players, where the player with highest points at the end would be named the best player in the world.

After finishing with a victory in the first round and taking in a 19-point performance, Giersdorf secured the Victory Royale with nine in-game kills. He then went on to notch dozens of in-game kills each round, until he ended up with 59 points — a lead of 26 points over the second-place winner.

“From the start, I had a big lead,” he said. “From there I knew I had to have consistent games, which you can’t always rely on placement but also kills. Looking for those kills really pushed me up in the leaderboard.”

He further added that after finding a safe spot in the last round to scope out enemies and collecting a lot of loot to use as ammunition, his championship win “was pretty much sealed from there.”

In order to prepare for the competition, Giersdorf used to play up to eight to 10 hours of Fortnite per day, at his home in Pennsylvania.

“Words can’t even explain it. I’m just so happy,” he said in an interview posted to Twitter by organizers. “Everything I’ve done, the grind, it’s all paid off. It’s just insane.”

Giersdorf has plans to save most of the prize money earned. “All I want is a new desk and maybe a desk for my trophy,” he told the BBC.

“I literally feel like I’m in a dream right now. It’s so surreal… This is life-changing for him,” Giersdorf’s mother, Darcy Giersdorf told ESPN.

“He’s been playing video games since he was three, so this is his passion. He told us he could do this, he put his mind to it and he did it,” she added.

Around 40 million players attempted to qualify over 10 weeks of online competition where the players had to find weapons, build structures and battle to survive in order to stay in the game. More than 30 nations were represented with 70 players coming from the U.S., 14 from France and 11 from the UK.