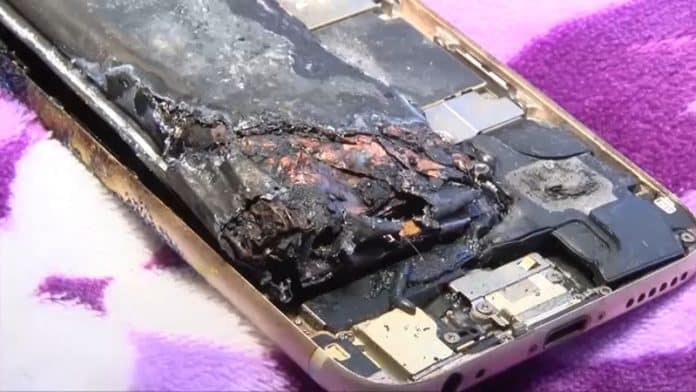 An 11-year-old girl from California claims that her iPhone 6 recently caught fire in her sister’s bedroom and burned holes in her blanket once she threw the device on it.

“I was sitting down, and I had my phone in my hand and then I saw sparks flying everywhere and I just threw it on a blanket,” Kayla Ramos told 23ABC News. “I was right here on the bed and the phone managed to burn through this blanket and make these holes.

Ramos added that she generally only uses the device to watch YouTube videos and occasionally allows her younger siblings to play games with it.

Kayla’s mother, Maria Adata said the next day she called Apple support and was instructed to send pictures and ship the phone back to Apple.

“This could have been my child. My child could have been caught on fire and she could have been hurt more and I am glad she’s ok,” said Adata. “I will no longer sleep with it next to me. I know we charge it a lot maybe that caused it, maybe it overheated.”

Adata said that Apple is investigating the cause of the phone explosion and is going to replace the faulty phone with a new one. She says this will be done, as soon as she returns the damaged device to Apple.

Meanwhile, Ramos is looking at the positive side of the incident. “It hasn’t been that bad,” she said. “I mean I have been able to hang out with my sisters and my family more.”

While Apple itself has not publicly commented on the situation, the iPhone-maker added there can be a few factors that could cause an iPhone to catch fire, including using unauthorized charging cables or any unauthorized apple repairs and external damage to a phone. However, in Ramos’ case, the family says that wasn’t the case with their iPhone 6.

The company also added in cases of malfunction of Apple’s products, the customer should contact their customer service number, or take the device to an authorized Apple service provider or nearest Apple store.