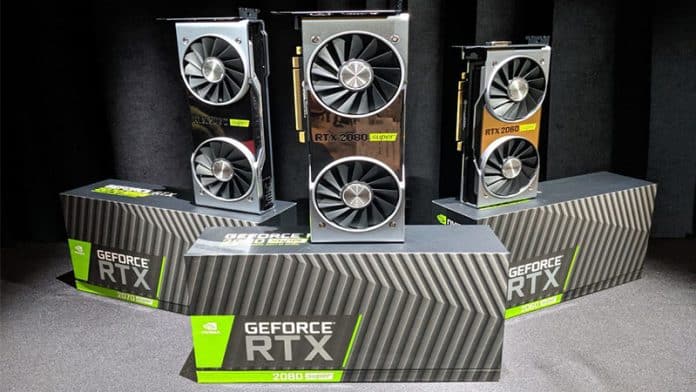 Just like the original RTX 20 series, these new graphics chips too are based on the Turing architecture as their predecessors and will include Ray-Tracing technology alongside Nvidia’s Deep Learning Super Sampling (DLSS). However, these now come with new GPU with additional CUDA cores, Tensor Cores, RT Cores, and faster clock speeds.

Coming to the RTX 2060 Super, it now features 8GB of GDDR6 video memory that runs across an aggregated 256-bit memory bus, instead of 6GB GDDR6 on a 192-bit bus on the original GPU. The card is also faster than the GTX 1080 from the previous generation and features 7+7 TOPs (FP32+INT32) and 57 Tensor TFLOPs. Additionally, it features up to 22% improved performance and around 15% average improvement overall in frame rate compared to the standard variant RTX 2060.

On the other hand, the GeForce RTX 2070 Super is said to be up to 24% faster and on average 16% faster than the regular RTX 2070 which is a great improvement. Nvidia is particularly claiming that this card is faster than the GTX 1080 Ti from the previous generation with 9+9 TOPs (FP32+INT32) and 73 Tensor TFLOPs.

Lastly, the RTX Super 2080 has its memory speed increased to 15.5Gbps from the 14Gbps on the current RTX 2080. Nvidia claims this variant is faster than the TITAN Xp from the previous generation and features 11+11 TOPs (FP32+INT32) and 89 Tensor TFLOPs.

The RTX 2060 Super and RTX 2070 Super will be available for purchase from July 9 for $399 and $499, respectively, while RTX 2080 Super will go on sale on July 23. Additionally, all three RTX Super cards will come bundled with two free RTX-enabled games that support real-time ray tracing: Control and Wolfenstein: Youngblood.