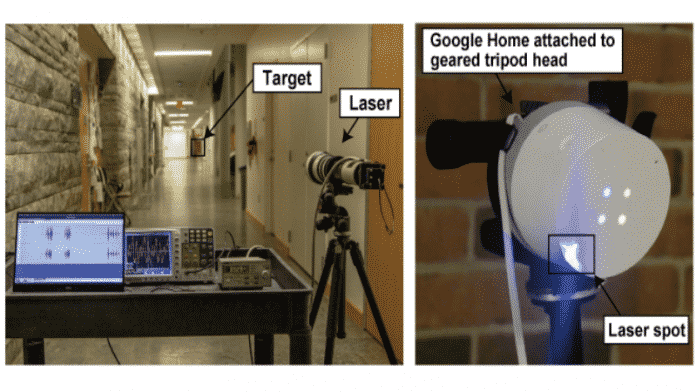 A group of researchers have discovered a security flaw that allows hackers to hack smart home speakers by pointing a specially crafted laser beam at their microphones and injecting them with voice commands.

What is interesting is that the same vulnerability can be used to compromise any computer that includes a microphone, as well as smartphones and tablets.

The study was carried out by researchers from The University of Electro-Communications in Tokyo and the University of Michigan. The vulnerability has been detailed in a new paper titled “Light Commands: Laser-Based Audio Injection Attacks on Voice-Controllable Systems.”

The flaw dubbed as ‘Light Commands’ mainly uses lasers to manipulate smart speakers with fake commands. It can also be used to break into other systems that are connected through a smart speaker like smartlock protected front door, connected garage doors, online shopping, locating and remotely starting some vehicles, and more.

“Light Commands is a vulnerability of MEMS microphones that allows attackers to remotely inject inaudible and invisible commands into voice assistants, such as Google assistant, Amazon Alexa, Facebook Portal, and Apple Siri using light,” the researchers wrote. “In our paper we demonstrate this effect, successfully using light to inject malicious commands into several voice-controlled devices such as smart speakers, tablets, and phones across large distances and through glass windows.”

The MEMS (microelectromechanical system) microphones in some of the most popular smart speakers and smartphones are so sensitive that they interpreted the bright light of the laser as sound.

Researchers were able to trick Siri and other AI assistants from up to 360 feet (110 meters) away just by focusing the laser light and even control a device in one building from a bell tower 230 feet (70 meters) away by shining their light through a window.

“Microphones convert sound into electrical signals. The main discovery behind light commands is that in addition to sound, microphones also react to light aimed directly at them,” the researchers wrote.

Google who is aware of the research confirmed that it is “closely reviewing this research paper.” The company added, “Protecting our users is paramount, and we’re always looking at ways to improve the security of our devices.”

While the vulnerability certainly sounds alarming, it’s not an easy exploit to pull off. It requires quite a sophisticated setup, a laser pointer, laser driver, sound amplifier, a telephoto lens, and more.