The new smartphones and tablets launched by Samsung are flagship devices. So here’s everything you need to know about these newly launched devices.

The first generation galaxy fold always felt like an incomplete device and every now and then it faced reliability problems. Samsung has listened to the requirements of users and offered drastic refinements in the second generation Samsung Galaxy Z Fold2.

The foldable device has a much larger 6.2-inch Infinity-O cover display. Moreover, the humongous notch on the inner 7.6-inch edge-to-edge has been removed in favor of a small hole-punch.

Samsung has also enhanced the folding mechanism of this smartphone. Similar to an actual laptop the Fold2 can be folded in any particular angle and it will retain the shape unless force is applied to restore the device back to normal.

As of now, not much information is revealed about the actual hardware specifications of the Galaxy Z Fold2. That said, the flagship device will be powered by the Snapdragon 865+ SoC. The smartphone will be available in Mystic Black and Mystic Bronze color variants and there will be a Thom Browne Edition as well.

The latest flagship offering from Samsung i.e. the Galaxy Note20 Ultra has a massive footprint and the overall design aesthetics of the smartphone scream premium. There’s a large 6.9-inch Quad HD+ Dynamic AMOLED Infinity-O Display on this device with a maximum resolution of 3088 × 1440 pixels.

Additionally, the flagship device offers a 120Hz refresh rate, up to 1500 nits of brightness, and it is protected by Corning Gorilla Glass Victus. Depending on the market from where you purchase the Note20 Ultra the smartphone will come with either the Snapdragon 865+ or Exynos 990 SoC. These processors are accompanied by Qualcomm Snapdragon X55 and Exynos Modem 5123 modem respectively. 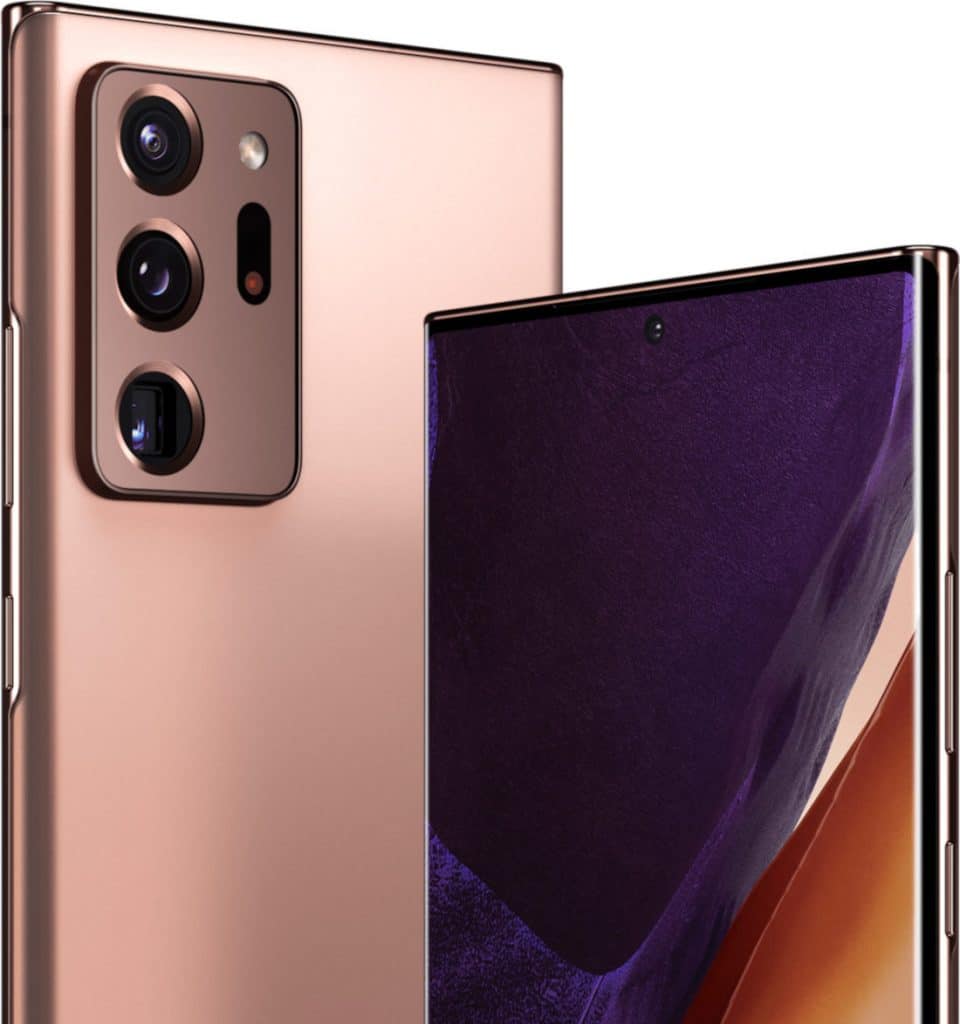 The high-end variant of Note20 Ultra offers 12GB LPDDR5 RAM coupled with 512GB of UFS 3.1 storage. Similar to every other Samsung flagship in existence, the storage of Note20 Ultra can be expanded to up to 1TB using an external SDCard. 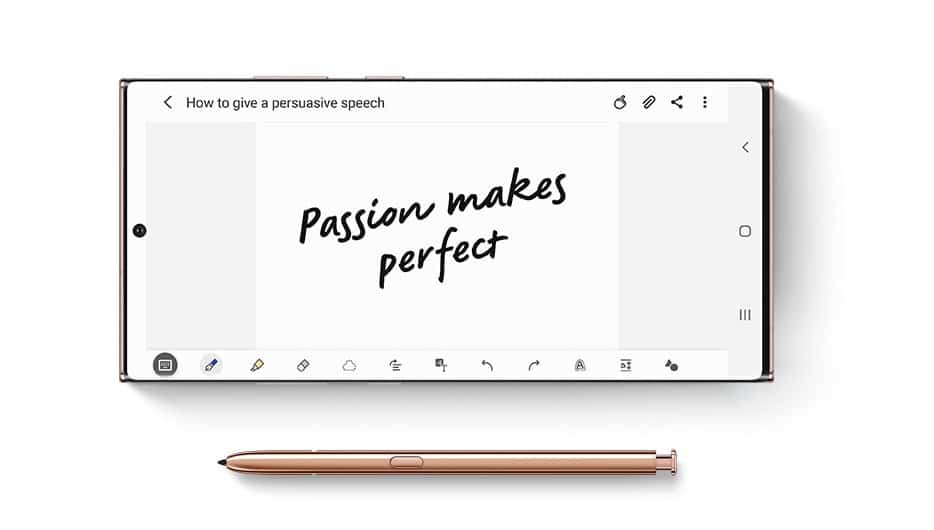 Samsung Galaxy Note20 Ultra comes with IP68 water and dust resistance. As for security, there’s an ultrasonic fingerprint sensor on this device. Note20 Ultra runs on Android 10 out of the box and the smartphone is backed up by a 4500mAh battery and it supports 45W fast charging.

The response time of the S-Pen that comes with Note 20 has also been reduced significantly.

In comparison to the Note20 Ultra, the standard Note20 comes with a smaller 6.7-inch Full HD+ Super AMOLED Plus Infinity-O display with a resolution of 2400×1080 pixels. Despite being a flagship smartphone Note20 Ultra features a plastic construction. The highest-end variant of this smartphone comes with a maximum of 8GB LPDDR5 RAM with 256GB (UFS 3.1) storage. 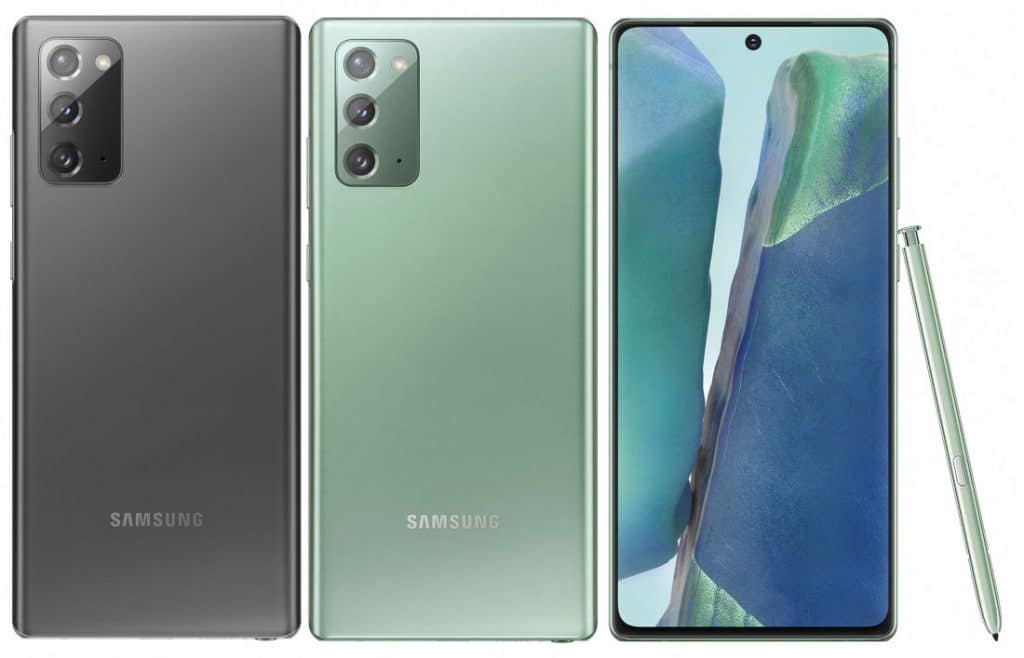 Samsung has also downgraded the camera on this smartphone. As a result, the triple camera setup on this device consists of a 12MP rear camera with f/1.8 aperture, PDAF, OIS. There’s a 64MP Telephoto lens with f/2.0 aperture, PDAF, OIS, 3x Hybrid Optic Zoom, Super-Resolution Zoom up to 30X. Lastly, there’s a 12MP 120° Ultra Wide sensor with f/2.2 aperture.

Apart from the flagship smartphones, Samsung also introduced the new Galaxy Tab S7 and Tab S7+ with 120Hz refresh rate displays. The higher-end Tab S7+ has a 12.4-inch super AMOLED panel while the Tab S7 has an LTPS TFT display. Both the tablets are powered by Octa-Core Qualcomm Snapdragon 865+ 7nm processor.

As for security, Tab S7+ comes with an in-display fingerprint scanner while the Galaxy Tab S7 had a side-mounted fingerprint scanner. These tablets are ideal for both content creation and consumption. Thankfully, both tablets support 45W Fast Charging and the Tab S7+ comes with a 10,090mAh battery. On the other hand, tab S7 has a smaller 8,000mAh battery.