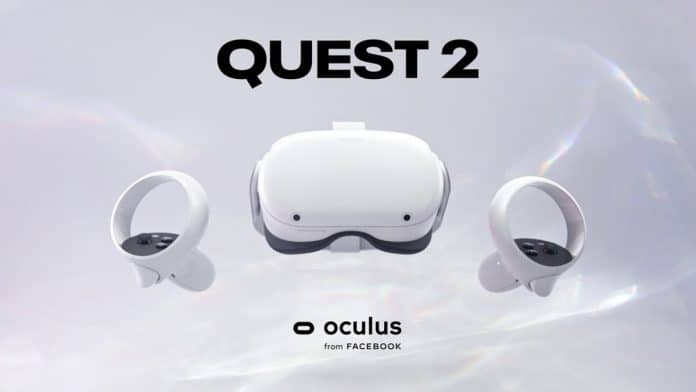 Facebook announced an updated version of its Oculus Quest headset called the ‘Quest 2’ priced at just $299 during its Connect VR/AR conference on Wednesday.

According to Facebook, Oculus Quest 2 packs a suite of innovations to power the next generation of VR games and experiences.

“Today, we’re excited to announce Oculus Quest 2, the next generation of all-in-one VR. Quest 2 pushes the state of VR forward with a redesigned all-in-one form factor, new Touch controllers, and our highest-resolution display ever,” says the Oculus blog.

“With a higher resolution panel and the ability to reach a higher refresh rate than Rift S, all in a lighter form factor and at a lower cost, Quest 2 brings a leveled-up PC VR gaming experience to enthusiasts.”

Weighing less than the original Quest, the Oculus Quest 2 comes equipped with the Qualcomm Snapdragon XR2 Platform (built specifically for AR and VR hardware) offering higher AI capability and 6GB of memory to offer even more immersive experiences. It will also have an option of 256GB of built-in storage.

The new LCD display features 1832 x 1920 pixels per eye over the original’s 1440×1600. With 50% more pixels than the original Quest, everything from multiplayer games and productivity apps to 360° videos look better than ever.

Further, with Quest 2’s increased graphics processing power, this new display is capable of supporting 90Hz. However, Oculus said the refresh rate will be set at 72Hz at launch but will open up 90Hz to all developers soon after launch. The inside-out tracking will be utilizing four cameras on the front of the headset.

The headset offers newly redesigned controllers for better ergonomics. The company has also optimized controller tracking to make it more efficient, delivering battery life that’s up to four times longer (performance may vary based on use) than Quest’s Touch controllers.

According to Facebook, Quest 2 has been redesigned to achieve a slimmer profile, cutting over 10% of the weight from the original Quest so it’s more portable and easier to wear. It also features a soft-touch strap and a built-in IPD (interpupillary distance) adjustment mechanism with three settings, which allows people to adjust lens position for visual comfort.

Furthermore, Quest 2 is compatible with the Quest library of content, which will also include exciting upcoming titles like Star Wars: Tales from the Galaxy’s Edge, Myst, Jurassic World Aftermath, Warhammer 40,000 Battle Sister, Pistol Whip: 2089, The Climb 2, Rez Infinite, and many more.

The headset is also compatible with Oculus Link, so you can enjoy the best of PC VR gaming —including Asgard’s Wrath, Stormland, and Lone Echo, as well as upcoming titles like Lone Echo II and Medal of Honor: Above and Beyond.

Going forward, Facebook plans to completely focus on building standalone VR headsets, which means it will no longer pursue PC-only hardware, with sales of Rift S ending in 2021. However, the Rift Platform will continue to stay around into the future.

The Oculus Quest 2 base model with 64GB of storage costs $299, while the 256GB model costs $399. The headset is available for pre-order now and will start shipping on October 13th.