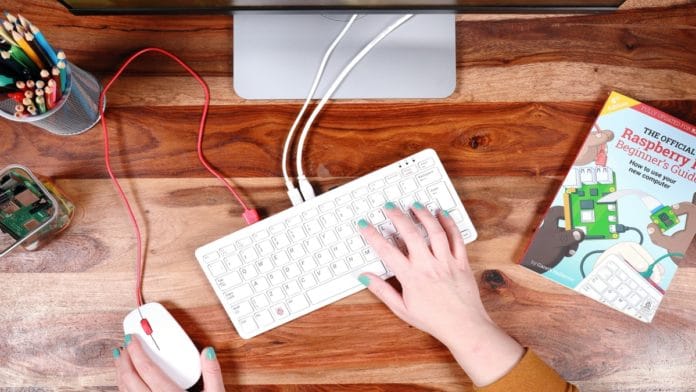 The Raspberry Pi Foundation on Monday announced “Raspberry Pi 400”, which according to the company, is a complete personal computer, built into a compact keyboard.

Inspired by classic home computers like BBC Micros, ZX Spectrums, Commodore Amigas, and others, Raspberry Pi has integrated the motherboard directly into the keyboard for Pi 400.

The Raspberry Pi 400 is powered by a quad-core 64-bit processor (an Arm Cortex-A72 CPU running at 1.8GHz) with 4GB of LPDDR4-3200 RAM. It also features Bluetooth 5.0 wireless display, 802.11ac Wi-Fi, Gigabit Ethernet port, two USB 3.0 ports and one USB 2.0 port for peripherals, and a microSD card slot, which is used for adding storage and transferring data.

Its two micro-HDMI ports support display resolutions of up to 4K / 60Hz, while the power supply comes through a USB-C port. Further, it also has 40 GPIO pins tweakers that can be used for additional storage or add-ons.

The Raspberry Pi 4 platform on which the computer is based is roughly 40 times more powerful than the original Raspberry Pi. According to the Foundation, the Pi 400 offers an experience “that is indistinguishable from a legacy PC for the majority of users.”

Since the start of the COVID-19 pandemic, the Foundation says it has seen a rapid increase in the use of Raspberry Pi 4 for home working and studying. “If you’re looking for an affordable PC for day-to-day use this is the Raspberry Pi for you,” it adds.

The Raspberry Pi 400 is now available for purchase as a standalone computer for $70 with no accessories. However, the Foundation is also offering a $100 package, which comprises of a Raspberry Pi 400 computer, a USB mouse, USB-C power supply, microSD card with Raspberry Pi OS pre-installed, a micro HDMI to HDMI cable, and the official Raspberry Pi Beginner’s Guide.

The Pi 400 is now available for purchase in the U.S., UK, and France, with more units coming to Italy, Germany, and Spain soon. By the end of the year, it will arrive in India, Australia, and New Zealand.

The computer is available with English (UK and US), French, Italian, German, and Spanish keyboard layouts. The Foundation also plans to support the same languages as its official keyboard in the near future.