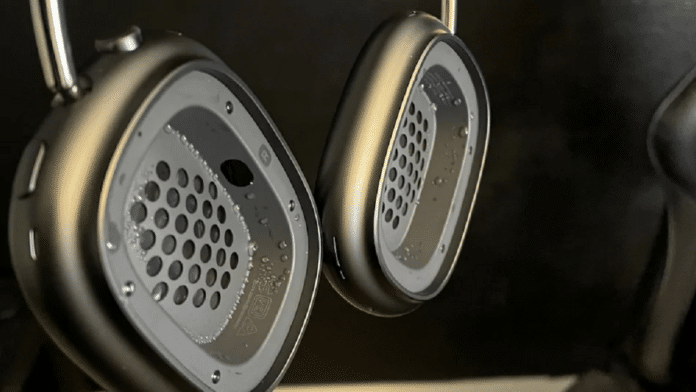 AirPods Max, the first wireless high-end headphones from Apple, launched earlier this month is drawing complaints from its customers. Apparently, AirPods Max owners are having a problem with condensation where water droplets are forming on the inside under the removable ear pads near the drivers.

While condensation inside the headphones after prolonged use is not unusual on such headphones, the metal ear cups along with their tight fit maybe some of the reasons for the increased amount of water.

Donald Filimon (@donaldfilimon) from Tampa, Florida, took to Twitter to raise his concerns and also posted pictures. He wrote, “So, uhh… my AirPods Max form condensation after extended use. They’ve never been used in any humid environment. The water gets inside the drivers and has caused ear detection problems. I’ve been wearing them inside sitting at a desk mainly, nothing crazy. Super concerning issue.”

So, uhh… my AirPods Max form condensation after extended use. They’ve never been used in any humid environment. The water gets inside the drivers and has caused ear detection problems. I’ve been wearing them inside sitting at a desk mainly, nothing crazy. Super concerning issue pic.twitter.com/0pWicvxLv9

Filmon also took to Reddit to elaborate his experience. He said, “Been using them inside at my desk, a little cold in the room but besides that pretty casual. Honestly have kept them so far away from any moisture because of their lack of water resistance. Absolutely love them, but this is a very concerning thing for me. Not sure how widespread this is, but I just noticed this yesterday because of the ear detection not functioning properly. The headphones seem to restore back to normal functionality when dry, but the fact that they condensate is interesting.”

Users with similar experiences too took to Twitter, Reddit and other platforms to report the same problem. While some users reported that their headphones began to malfunction until the moisture disappeared, some users posted pictures of their headphones with visible signs of moisture on it.

According to a report by Cult Of Mac, the snug over-ear fit trap air and heat when Active Noise Cancellation is enabled, thereby contributing to the entire condensation process.

Apple suggests its users to wipe the ear cups after extended listening session or exercising and pop out the cushions and wipe dry the metal interiors with a “soft, dry, lint-free cloth” to prevent any unnecessary damage to the drivers.

Apple is yet to officially comment on the matter.