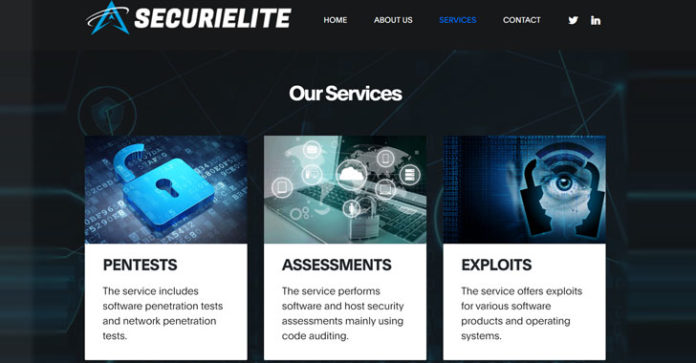 For those unaware, in January 2021, TAG had disclosed a hacking campaign, targeting security researchers working on vulnerability research and development across different organizations. On March 17th, the same actors behind those attacks set up a new website for a fake company called “SecuriElite” as well as associated Twitter and LinkedIn accounts.

The new website claims that it is an “offensive security company located in Turkey that offers pentests, software security assessments and exploits”.

As per the experts, this website has a link to their PGP public key at the bottom of the page like the previous websites set up by the actor. The PGP key hosted on the attacker’s blog acted as the lure for unsuspecting researchers in January attacks to visit the site “where a browser exploit was waiting to be triggered”.

The threat actors used multiple platforms to communicate with potential targets, including Twitter, LinkedIn, Telegram, Discord, Keybase and email to communicate with the researchers and build trust, only to deploy a Windows backdoor through a trojanized Visual Studio Project.

Following the discovery, Google reported all identified social media profiles to the platforms to allow them to take appropriate action, after which all of them were suspended.

The accounts seemed to be owned by vulnerability researchers and human resources personnel at various security firms including Trend Macro (a fake name inspired by Trend Micro), while some posed as the Chief Executive Officer and employees at the fictitious Turkish company.

Currently, the new attacker website is not serving any malicious content to deliver malware; however, Google has added the website’s URL to Google Safebrowsing as a precaution to prevent accidental visits by the users.

Following TAG’s disclosure in January 2021, security researchers from South Korean cybersecurity firm ENKI successfully identified these actors using an Internet Explorer 0-day. Based on their activity, TAG researchers believe that these actors are dangerous and likely have more 0-days.

“We encourage anyone who discovers a Chrome vulnerability to report that activity through the Chrome Vulnerabilities Rewards Program submission process,” concluded Adam Weidemann from TAG in the blog post.