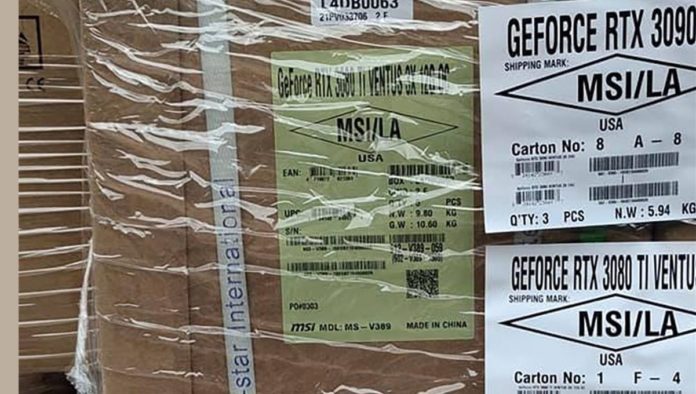 MSI Ventus models of Nvidia’s upcoming RTX 3080 Ti 12GB graphics cards are all set to launch next month, according to a report from tech site HKEPC.

The RTX 3080 Ti 12GB graphics cards were reportedly spotted by the publication with cartons marked “GeForce RTX 3080 Ti Ventus 3X 12G OC” during the process of shipment from Hong Kong to retail stores in the U.S.

The carton also included several other graphics cards, including the RTX 3090, Radeon RX 580, and even GeForce GT 710.

The card will arrive with 12GB of GDDR6X memory, which was previously rumored to be 20GB or 16GB. Nvidia’s RTX 3080 Ti reportedly uses 19Gbps GDDR6X memory over a 384-bit memory bus.

Although nothing is officially announced, NVIDIA has plans to launch their RTX 3080 Ti graphics card in May for $999 in the U.S.