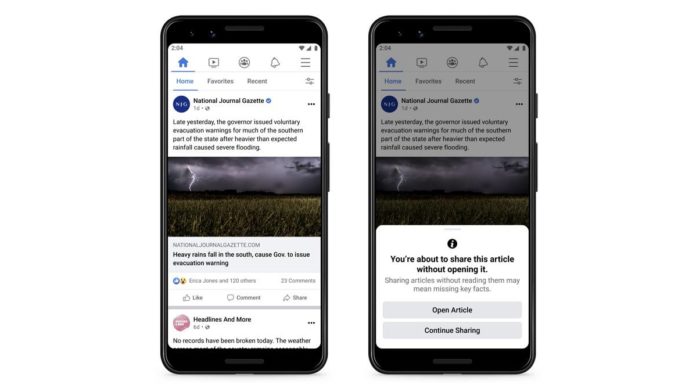 Facebook is testing a new pop-up feature that will encourage users to read an article before they share it on the social media platform.

Last year, a similar measure was introduced by another social media giant Twitter on its platform, which prompts its users to read an article before they retweet it.

This move has led to users opening articles 40% more often and also reduced the rate of inadequate awareness of the current news and events.

If the users want to share a news article link that they haven’t read, Facebook will show a prompt encouraging them to open it and read it, before sharing it with others or via a direct message.

This prompt pops up on the users’ screen when they hit the share button.

“You’re about to share this article without opening it,” the prompt says. “Sharing articles without reading them may mean missing key facts.”

It provides users with the option to either open the article or continue sharing it without reading.

Starting today, we’re testing a way to promote more informed sharing of news articles. If you go to share a news article link you haven’t opened, we’ll show a prompt encouraging you to open it and read it, before sharing it with others. pic.twitter.com/brlMnlg6Qg

Currently, Facebook is testing the feature with only a small percentage of its global users on Android.

In June last year, Facebook had rolled out a similar global notification screen that warns users if they are about to share an article that is over 90 days old and ones about COVID-19.

The notification screen was to help people understand the recency and source of the content before they share it so that the content on the platform becomes more timely and credible.