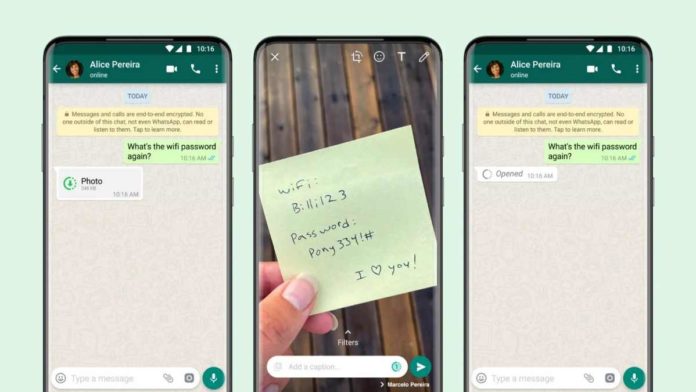 Facebook-owned messaging app WhatsApp has rolled out a new feature that allows users to send photos and videos that disappear after they have been viewed once by recipients.

The new feature called ‘View Once’ enables WhatsApp users to set photos or videos to disappear from chats after the recipient has opened it and exited the media viewer.

As with all the personal messages, photos, and videos sent using this feature have end-to-end encryption so that WhatsApp cannot see them. They will also be clearly marked with a new “one-time” icon to indicate that they will disappear. Once the media content has been viewed, it will display a message as “opened”.

“While taking photos or videos on our phones has become such a big part of our lives, not everything we share needs to become a permanent digital record. On many phones, simply taking a photo means it will take up space in your camera roll forever,” WhatsApp wrote in a blog post on Wednesday.

“That’s why today we’re rolling out new View Once photos and videos that disappear from the chat after they’ve been opened, giving users even more control over their privacy.”

According to WhatsApp, potential uses of the new feature are when you want to send a photo of some new clothes you’re trying on at a store, a quick reaction to a moment in time, or something sensitive like a Wi-Fi password.

You can now send photos and videos that disappear after they’ve been opened via View Once on WhatsApp, giving you more control over your chats privacy! pic.twitter.com/Ig5BWbX1Ow

What Are The Key Features Of ‘View Once’?

How Does WhatsApp ‘View Once’ Work?

To send a WhatsApp photo or video that disappears after a single viewing, you need to follow the below-mentioned steps:

You will see an Opened receipt in the chat once the recipient has viewed the photo or video. Note: You need to select the “1” button every time you wish to send a “View Once” photo or video.

You can try out the new ‘View Once’ feature by downloading the latest version of WhatsApp through Apple App Store for iPhones running 10.0 and later and from the Google Play store for Android devices.