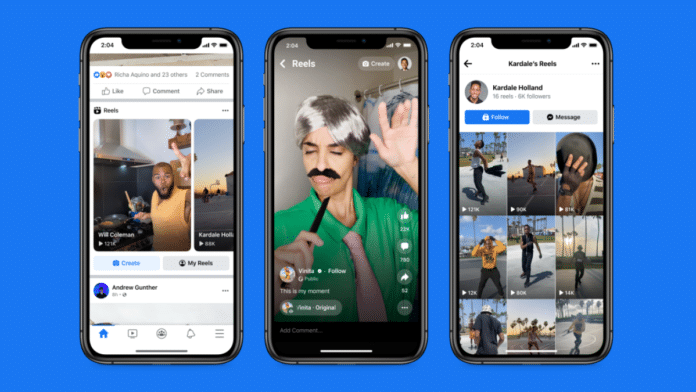 Facebook on Wednesday officially rolled out Instagram Reels, its short-form videos for iOS and Android users in the U.S. after testing last month.

“Today we’re launching Reels on Facebook for iOS and Android in the US. We’re bringing short form, entertaining video experiences and tools that have inspired creators on Instagram to more creators and audiences on the Facebook app,” the company wrote in a blog post.

“With the ability to create reels and have their Instagram reels suggested to people on Facebook, creators — whether they’re just starting out or already have a large following — will have more ways to express themselves, grow their communities and reach new audiences.”

Reels on Facebook will be available in News Feed or in Groups, and can be created by tapping Reels at the top of News Feed or while watching a reel, or a group’s feed. When viewing a reel on Facebook, users can easily follow the creator directly from the video, like and comment on it, or share it with friends.

Further, creators can build new audiences with Reels in different ways across Facebook:

Get Discovered in News Feed: Reels can reach everyone, not just existing followers. People can discover reels based on their interests and what’s popular both at the top of News Feed alongside Stories and Rooms and in a new, dedicated News Feed section.

Express Yourself in Groups: Creators and group members can create and share reels in Groups to express themselves and engage in a more fun and visual way with their favorite interest communities. And for admins, Facebook is rolling out a new ‘Single Theme’ group setting that makes it easy to prompt members to share their reels.

Furthermore, creators can unleash their creativity with Reels by using editing tools available for Facebook Reels such as:

Audio: Users can search for a song from the Facebook music library for their reel or use their own original audio by simply recording a reel with it. Audio can be added from the camera before capturing a clip, or after capturing or uploading a clip. Reels can also be created with original audio from other public reels by selecting Use Audio from the other person’s reel.

AR Effects: Many effects in the augmented reality library are created by either Facebook or third-party developers, to record multiple clips with different effects.

Timer and Countdown: Set the timer to record any of your clips hands-free without having to press the shutter button.

Speed: Speed up or slow down the video while you record, which helps you stay on a beat or make slow-motion videos.

Multi-clip: Stitch together multiple clips into a single reel either by recording them together or selecting them from the gallery.

As part of its commitment to invest over $1 billion in creators through 2022, Facebook is also offering a new bonus program to help creators earn money when people view their reels.

“The Reels Play bonus pays eligible creators based on the performance of their reels, and will be available on both Facebook and Instagram. After seeing creators embrace the Instagram Reels Summer bonus, we hope this new bonus will allow more creators to make money from their content,” the company added.

The Reels Play bonus will initially be invite-only, beginning in the U.S. and potentially expanding globally over time. Interested creators can sign up to learn more about the Facebook Reels Play bonus and can visit Facebook for Creators blog to learn best practices for creating reels.

Reels on Facebook are set to be public for creators who are over 18, but users can change the audience at any time. Audience options include Public, Friends, or Friends except.