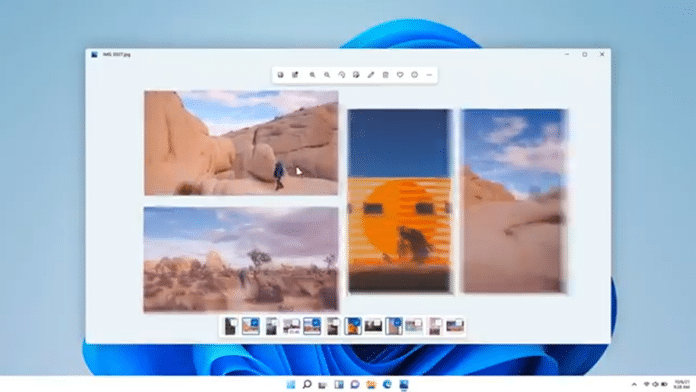 The short and fast-paced video shared by Panoy highlights the saying “Relive your memories in a new way”. The new Photos app appears to have a fluent design language, some rounded corners, a cleaner user interface, and a floating toolbar at the top center.

It also includes smaller menu controls for editing images, creating collages and slideshows, as well as an improved cropping menu, and easy access to the Information Page.

Pumped to share another #Windows11 first look with you – the beautifully redesigned #PhotosApp is coming soon to #WindowsInsiders pic.twitter.com/hraNJAo9iF

There is also a new info button that displays details of an image with just a click and geolocation (if any) on a small map on the right side of the image. The app also gives quick access to the camera and other related information from the photo you are editing.

Additionally, the homepage of the Photos app will be segmented into five main sections: Collection, Albums, People, Folders, and Video Editor. You can select any given photo from any section to open it in a new viewing screen.

The new Photos app will be available for Windows Insider users soon and is expected to be included in the final version of Windows 11 set to officially launch on October 5th.

Recently, Microsoft has given significant revamps to apps such as Snipping Tools and the Clock, which now includes a Focus Sessions feature.

A few weeks ago, the company had also teased revamped Paint app for Windows 11, which is yet to roll out to Windows Insiders.