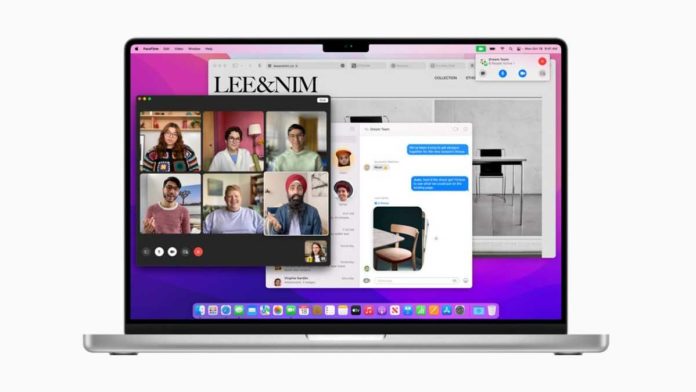 Apple on Monday announced the availability of macOS Monterey or macOS 12.0.1 (build 21A559) as a free software update on Macs with Apple silicon and Intel-based Macs.

Let’s have a look at what’s new in macOS Monterey:

To begin with, FaceTime includes new audio and video features that make calls feel more natural and lifelike. With spatial audio, voices in a FaceTime call sound like they are coming from where the person is positioned on the screen.

Mac users also get two new microphone modes, which give them more control over how their voice sounds. There is Voice Isolation that eliminates background noise to ensure the user’s voice is crystal clear, while Wide Spectrum allows all the noise to come in so participants can hear everything.

Besides this, there is a new feature in FaceTime called Portrait mode, which utilizes the Neural Engine in the M1 chip to keep the user in focus while blurring the background, and a new grid view that shows participants of a Group FaceTime call in same-size tiles.

SharePlay enables users to have shared experiences on a FaceTime call. Users can experience their favorite music, TV shows, movies, and more with friends and family in real time, and shared playback controls lets anyone in a SharePlay session play, pause, or jump ahead.

They can also share their whole screen or just a specific app, making it easy to collaborate with friends or co-workers on a call. SharePlay works with apps like Apple Music and Apple TV+, as well as popular third-party services.

Universal Control allows users to work with a single mouse and keyboard and move seamlessly between Mac and iPad. Users can place devices next to each other and instantly move the cursor from one device to the other — no setup required.

They can use their Mac keyboard to type text on any device, or drag and drop content back and forth easily between devices. Users can even draw with Apple Pencil on iPad, and place their illustrations right into apps on their Mac, enjoying the powerful capabilities of all their devices at once.

AirPlay to Mac allows to easily play, present, and share just about anything from iPhone or iPad right to a Mac. Users can use AirPlay to share the latest movies and games, photos, and presentations directly to the Mac’s stunning Retina display or play music from across the room to the high-fidelity sound system in their Mac.

Live Text detects text in photos, including phone numbers, websites, addresses, and more so that users can copy and paste, make a phone call, open a website, and easily look up more information. On the other hand, Visual Look Up helps users discover and learn about animals, art, landmarks, plants, and more in photos.

Both Live Text and Visual Look Up work across macOS and leverage powerful on-device machine learning, so user data is kept private.

Focus filters notifications from apps and people based on what the user wants to focus on in that moment. When a user has Focus set on their Mac, it automatically sets across their other Apple devices.

Safari now offers users more control over how they browse the web, including a new Tab Groups feature that allows users to easily save and organize tabs. Tab Groups sync across Mac, iPhone, and iPad, so users can continue their project from anywhere, and easily share tabs with friends and family.

It also comes with a new optional compact tab bar design that gives users more space to browse, integration with Shared with You so that users can easily access links sent from Messages, and support for Quick Note makes it easy to keep track of information discovered on websites. It also offers users more privacy protections, with Intelligent Tracking Prevention now preventing trackers from profiling users with their IP address.

Shortcuts On The Mac

Shortcuts on the Mac helps users automate everyday tasks, like instantly opening their frequently used apps to jumpstart their workday, or adding a reminder to their groceries list for when they get to the market, right from their Mac.

Shortcuts editor enables users to customize shortcuts to match their workflows. With Shortcuts integrated throughout macOS, including the menu bar, Finder, Spotlight, and Siri, it’s easy to run shortcuts at any time. Users can also import existing Automator workflows into Shortcuts and instantly be up and running.

Shared with You displays content shared over Messages in your Mac apps. Shared with You makes it easy to enjoy content shared through Messages right in Photos, Safari, Apple Podcasts, Apple News, and the Apple TV app. Users can easily find shared content, see who recommended it, and reply inline on the original thread it was shared. Also, multiple photos in Messages now appear as a collage.

To download the free software update, you need to go to System preferences > Software update. You can also go to About this Mac to check for updates from the Apple menu.